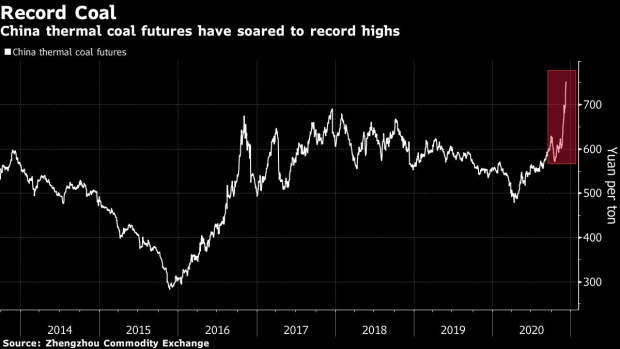 (Bloomberg) -- At China’s biggest coal event in the mining hub of Shanxi, the industry’s top executives signed deals over three days for more coal than other nations typically use in a year.

But the bustling deal-making signals deeper problems in a market vital to the smooth-running of the world’s second-biggest economy. A series of deadly mining accidents has hit output, while self-imposed import restrictions -- including on key supplier Australia -- limit shipments from overseas.

The result is a supply crunch at a time when winter demand for heating is peaking and industrial activity is surging. The price of coal used in power plants has soared far beyond the government’s tolerance levels to record levels. The market for coking coal used by the steel industry isn’t far behind.

Even as China’s climate ambitions drive an eventual break with coal, the highly polluting fuel remains critical to powering its cities and factories, and the effort to revive growth after the pandemic. It provides half the country’s energy needs at an unmatchable price. Beijing’s response to the fatalities -- shutting mines and demanding more stringent safety inspections -- may benefit producers via higher prices, but it piles on the costs for utilities and China’s vast industrial base.

“Coal prices will remain high in the near term,” said Dennis Ip, an analyst with Daiwa Capital Markets. “This winter is expected to be a cold one and year-end stocking demand is increasing, so coal demand will likely be strong, while coal supply remains restrained as safety checks have strengthened due to coal mine accidents along with the continued ban on Australian coal.”

The industry has dramatically improved safety in recent years, with annual deaths falling from the thousands to the low hundreds. But fatalities have ticked-up slightly in 2020, and regulators are particularly concerned about a spate of accidents beginning in late September, when 16 people died of carbon monoxide poisoning in a mine in Chongqing.

Two more fatal accidents in the southwestern city in late November prompted the authorities to shut down all its mines. Output elsewhere has been crimped by increased inspections, which require suspending operations.

The accidents have exposed illegal production, weak safety and inadequate supervision, a government official told the Shanxi trade fair. And the pandemic could be partly at fault, according to Bloomberg Intelligence analyst Michelle Leung, as smaller miners may have taken short-cuts to recover lost output after lockdown measures forced temporary shutdowns for lack of workers.

Those suspensions caused imports to surge in the early months of the year as power plants sought alternatives. Once domestic production had rebounded, the government reversed course by drastically curbing overseas supplies. On top of that, Beijing has responded to souring diplomatic relations with Australia by stranding millions of tons of its coal on ships off Chinese ports.

“Because of the deteriorating relationship between China and Australia, imports won’t be able to relieve the supply tightness this year,” Ip said.

The hits to supply are coming at the beginning of what’s expected to be a chillier-than-usual winter because of the La Nina weather pattern. Demand for coal is rising as power plants try to stock up in anticipation of extra heating needs, said Jennifer Song, a Shenzhen-based analyst with Morningstar.

And that seasonal shift has been accompanied by a broader rebound in electricity consumption as China’s industrial sector completes a V-shaped recovery from the pandemic, which is “the primary reason driving strong coal demand,” Song said.

The Chinese government likes its coal market just as Goldilocks liked her porridge -- neither too hot nor too cold. It means keeping prices in a band known as the green zone that allows miners to make money without impinging on profits at power plants. But the current rally has busted the upper limit, and officials are starting to take action.

Price-reporting agencies last week suspended publication of some widely used indexes. That’s happened before when green zone limits have been breached, and the market typically takes it as a sign of Beijing’s displeasure.

The green zone band is typically between 500 and 570 yuan ($76 to $87) a ton, but spot prices are now well above 600 yuan and bids are closer to 700, according to analysts. Thermal coal futures on the Zhengzhou Commodity Exchange closed 1.1% lower Friday at 744.6 yuan a ton, and traded at about $34 a ton more than Australian supplies.

Such contracts for 740 million tons were announced on the first day of the Shanxi trade fair. India, the world’s second-biggest consumer, uses about 585 million tons in a year. So far, though, such efforts haven’t been enough to stop the runaway rise in prices. “The government did take some actions, but the actions haven’t helped,” Song said.

The longer term outlook is much more bearish as the government champions renewable energy to meet its climate pledge of net-zero carbon emissions by 2060. While that’s helped drive the cost of wind and solar power to levels near that of coal, China is still building new coal power plants to ensure it can meet rising power demand.

As for coal prices, most analysts expect they will remain elevated at least through mid-February, as the cold weather and the need to stockpile before the Lunar New Year holiday will continue to stoke demand. “The weather is going to stay cold, and supplies are going to stay tight,” said Bloomberg Intelligence’s Leung.