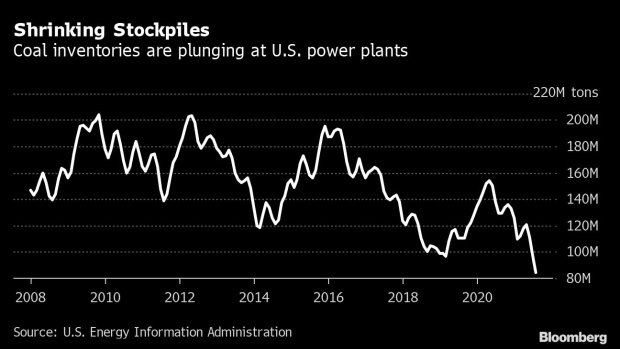 (Bloomberg) -- Coal stockpiles at U.S. power plants plunged to the lowest in at least 24 years as electricity generators burn the fuel faster than miners can dig it out of the ground.

Inventories fell to 84.3 million tons in August, according to government data released Tuesday. That’s the lowest in records going back to 1997, when Bill Clinton was beginning his second term as U.S. president. As recently as the start of this year, stockpiles stood at 125 million tons.

As the global economy recovers from the pandemic, demand for electricity -- and the fuels used to produce it -- is surging around the world. That’s pushed natural gas prices to all-time highs in some regions and the knock-on effect has been that utilities are burning more coal as a less-costly alternative.

In the U.S., power producers are on track to burn 19% more coal this year, but miners have been curbing production capacity for years and that will limit 2021 output growth to less than 10%. That’s forcing generators to burn through reserves of the dirtiest fossil fuel, and heightening concerns about winter supplies.

The inventory decline came on very quickly as the global energy crisis took root. Stockpile trends didn’t look unusual in the first half of the year, but then fell 13% in July from the prior month and another 13% in August.

“Stockpiles are coming down very rapidly,” he said. “If we have a cold winter, and there has been lots of talk that there could be a cold winter, we could see some issues.”

That’s unlikely to change anytime soon. Gas producers aren’t ramping up production, so prices for the fuel that also runs furnaces in many homes are likely to stay high into next year.

As a result, coal consumption also will remain elevated around the world, according to Edward Gardner, an analyst with Capital Economics in London.

“The high level of demand over the next year will make it harder to build stockpiles back up,” he said.