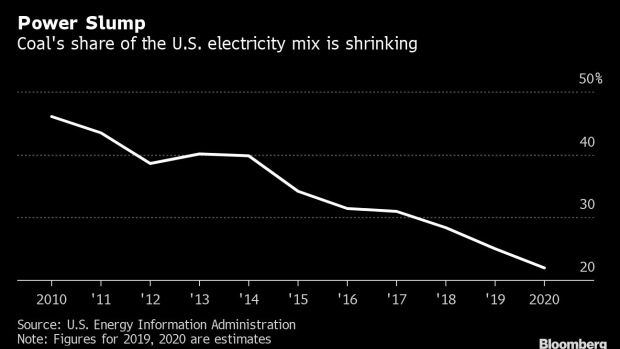 (Bloomberg) -- Washington state’s biggest utility is selling a stake in one of America’s largest coal-fired power plants for $1, seeking to comply with a new state law requiring energy companies to stop using the fuel by 2025.

Puget Sound Energy Inc. agreed to sell its 25% stake in the 740-megawatt Colstrip Unit 4 facility to NorthWestern Energy Corp., according to a statement Tuesday. As part of the deal, Puget Sound will sign a five-year power purchase deal for 90 megawatts of capacity from the plant, just under half of what it’s selling.

The bargain-basement price reflects the environmental risk that comes with owning coal plants. NorthWestern will be increasing its stake in the plant to 55%, but Puget Sound will retain its obligation to cover 25% of the decommissioning and remediation costs until the deal closes.

“Nobody wants to buy this plant because it’s a liability nightmare,” said Doug Howell, a senior campaign representative for the Sierra Club, said in an interview.

The Colstrip facility in eastern Montana has four units with almost 2.1 gigawatts of capacity. Units 1 and 2, with 600 megawatts of capacity, are set to close at the end of this month. It’s among a wave of big coal plants shutting down as U.S. utilities turn away from coal, and states increasingly mandate the use of clean energy. The massive Navajo generating station in Arizona went dark last month.

Washington passed a law in May that requires the state to phase out the use of coal by 2025 and use only clean energy by 2045. That will apply to Bellevue, Washington-based Puget Sound, but not to NorthWestern, which isn’t based in the state.

There weren’t other potential buyers for the plant, said Ron Roberts, director of generation and natural gas storage at Puget Sound Energy, adding, “there’s not a great market right now for coal plants.”

The deal will benefit customers, Roberts said, in part because Puget Sound will no longer be responsible for operation and maintenance costs or capital expenses.

NorthWestern will gain 185 megawatts of capacity. Between the five-year power-purchase deal and the energy it won’t have to buy for its own needs it expects about $5 million in benefits per year, the company said. The deal must be approved by state regulators.

NorthWestern also announced its own long-term carbon target Tuesday, committing to reduce the carbon intensity of its generation in Montana by 90% by 2045. While expanding its coal portfolio now is counter to that goal, spokeswoman Jo Dee Black said the short-term benefits will offset the cost of curbing emissions over the next 25 years.

In a separate transaction, Puget Sound agreed to sell part of its stake in a 500-kilovolt Montana transmission network to NorthWestern, at an estimated price of as much as $3.75 million.

Puget Sound owns stakes in all four Colstrip units. With Units 1 and 2 about to close and a deal to sell its portion of Unit 4, Unit 3 will be its only remaining coal asset. “We’re trying to clean up our portfolio,“ Janet Kim, a Puget Sound spokeswoman said in interview.

To contact the editors responsible for this story: Lynn Doan at ldoan6@bloomberg.net, Reg Gale, Joe Richter