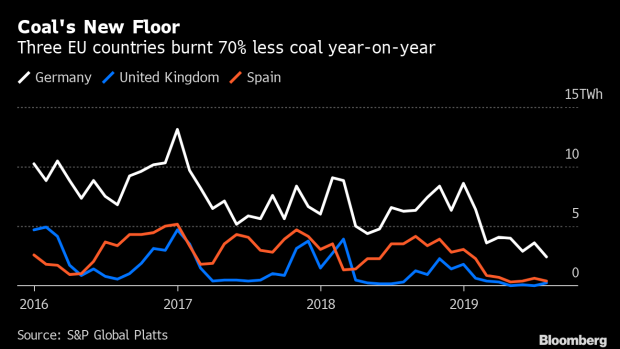 (Bloomberg) -- Coal power generators in Europe face 6.6 billion euros ($7.3 billion) of losses this year as plunging renewable energy costs and cheap natural gas cut use of the dirtiest plants to a record low.

Almost 80% of lignite and hard coal-fired generators will be unprofitable this year, a hit the industry is unlikely to survive without government help, according to a report from Carbon Tracker. The research group pushing for lower greenhouse gas emissions calls for a continent-wide phaseout of the most polluting fossil fuel by 2030.

Utilities in Germany, Spain and the Czech Republic are the most exposed to falling profits in a year where falling coal prices and rising carbon emission permits make it less attractive to burn the fuel for power. Coal’s days are already numbered in Germany, which plans to shut its plants by 2038, and Spain has set a 2030 deadline.

While European year-ahead coal prices have dropped to about $66 a ton from more than $100 a year ago, EU carbon permits have surged fivefold since 2017. That has driven up the cost of burning coal. At the same time, benchmark gas contracts in the Netherlands are trading 27% below their 10-year seasonal average, encouraging utilities to use that fuel instead.

The report by Carbon Tracker, an environmental group that advises institutional investors, points to how energy economics is prompting nations to wean themselves off coal to curb emissions and slow climate change. For most of this decade it was more profitable to burn coal in Germany, but that relationship was turned on its head this year because of a glut of gas.

“EU coal generators are hemorrhaging cash because they cannot compete with cheap renewables and gas and this will only get worse,” said Matt Gray, Carbon Tracker’s head of power and utilities. “Getting off coal is cheap and can be a win-win for consumers and shareholders, providing governments and investors work with local communities.”

RWE AG, which owns six coal plants in Germany, could incur losses of close to 1 billion euros in 2019, Carbon Tracker said. In countries such as Poland where wholesale prices are higher and government subsidies are generous, coal plants can remain profitable for the foreseeable future, the analysts said.

RWE didn’t respond to calls or emails for comment.

Hard coal generation has collapsed by 39% in 2019 while lignite has seen a 20% decline year-on-year, according to Carbon Tracker which it calls “eye wateringly low” utilization rates.

Bloomberg Philanthropies, which along with Bloomberg LP is owned by Michael Bloomberg, helps fund Carbon Tracker.