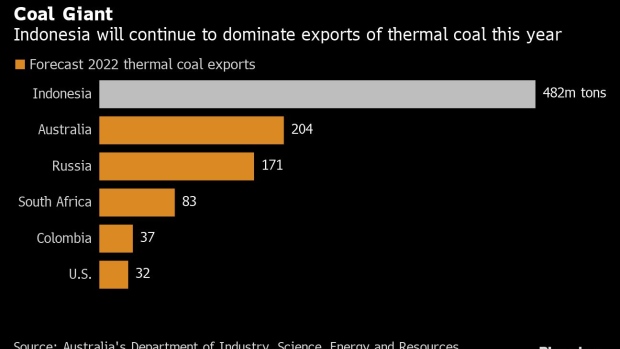 There’s “meaningful upside” to a forecast that high-quality thermal coal at Australia’s Newcastle port will average $140 a ton in the first quarter if the ban is put in place, Morgan Stanley analysts including Marius van Straaten wrote in a note dated Monday.

“Losing 40% of the seaborne market overnight, in the midst of peak winter demand, could set us up for another coal price spike,” the analysts wrote.

Indonesia has said it plans to pause exports in January to secure coal supplies for domestic power plants, and President Joko Widodo on Monday warned miners would face sanctions if they fail to supply to local buyers. However, there’s still debate within the government over the proposal as producers want to access high-priced foreign markets.

Benchmark Newcastle coal jumped to a record of $270 a ton in October and is currently trading at around $152 a ton, according to the Morgan Stanley note. Prices soared on tight supply and as nations across Asia grappled with power shortages.