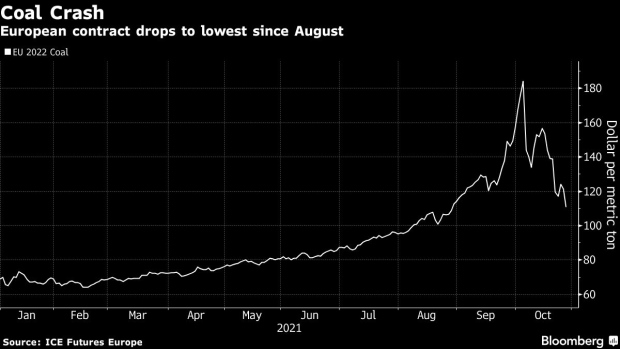 European benchmark coal prices plunged to the lowest since August amid news that China is stepping up efforts to limit soaring costs for the fuel, helping push down German and French power futures.

China plans to cap the price at which miners sell thermal coal in a bid to ease a power crisis that’s prompted electricity rationing and even blackouts. The move could help ease pressure on prices in Europe, where inventories have been strained by mining issues in Russia and Colombia as well as demand for the fuel from Asia.

“If China can increase its production and also put a cap on prices we should see a diluting effect” on European rates, said Gustav Olsson, a power trader at Swedish utility Bixia AB. “The share of demand they will have to meet with expensive imports will not be as big,” easing China’s buying up of coal on the world market, he said.

As the global economy recovers from the pandemic, demand for electricity and the fuels used to produce it is surging around the world. That helped push natural gas prices to all-time highs in Europe, prompting utilities to burn more coal as a cheaper alternative and contributing to record power costs.

European next-year coal futures fell as much as 8.7% to $110.95 a ton on the ICE Futures Europe exchange before paring declines to $116.50. The contract traded as high as $193/ton earlier this month.