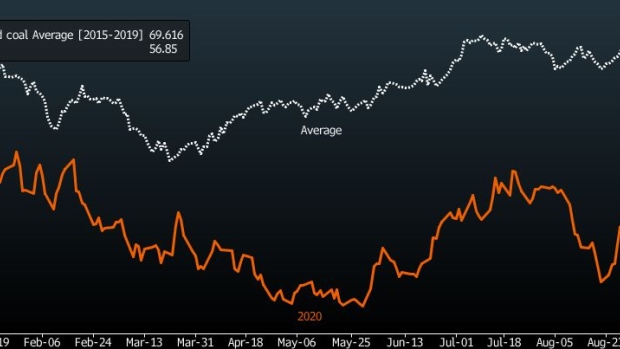 A giant excavator operates at the Garzweiler open cast lignite mine, operated by RWE AG, in Garzweiler, Germany, on Tuesday, March 3, 2020. Germany could close its last coal-fired power plant long before a 2038 deadline as the dirtiest fossil fuel gets squeezed out of the energy mix by clean electricity. , Bloomberg

Coal prices in Europe show little sign of getting the usual uplift into the winter heating season thanks to a groundswell of rising pollution costs, cheap natural gas and high renewables output.

Power demand crippled by Covid-19 has made it even more difficult for the industry to compete economically, with coal generation down 44% among seven major European utilities in the first half of 2020 as renewables output increased by 38%, according to BloombergNEF.

Year-ahead coal prices have almost halved since 2018 when the fuel hit $100 a ton, and could plunge to $45 by next year, according to Capital Economics Ltd. Coal futures for 2021 were trading at $57.75 a ton on ICE Futures Europe on Monday.

“High carbon credit prices, strong production growth in Russia and a fitful economic recovery in Europe will keep prices subdued,” said James O’Rourke, a commodities economist at Capital Economics. “We doubt that coal consumption in Europe will ever recover to pre-virus levels, as most European countries are actively investing in decarbonizing power generation.”

Coal received a boost during a heat wave in July and August that increased power consumption. But the weakest seasonal natural gas levels since 2009 and carbon-emission permit prices near record highs are expected to persistently squeeze coal out of electricity generation.

For the past year, it has been cheaper to burn gas for power than coal, according to the Bloomberg German year-ahead spark spread model.

Coal demand may also find support as some nuclear plants in France, which relies on atomic energy for more than 70% of its electricity, remain offline amid the Covid crisis. At the same time, a coal-miners’ strike in Colombia, a key European supplier of the fuel, highlight the constraints on imports.

Increased demand during the winter period, “together with less supply from Colombia and the U.S.,” could cause prices to “move slightly higher from their current levels,” said Matthew Boyle, lead analyst for global coal at S&P Global Platts.