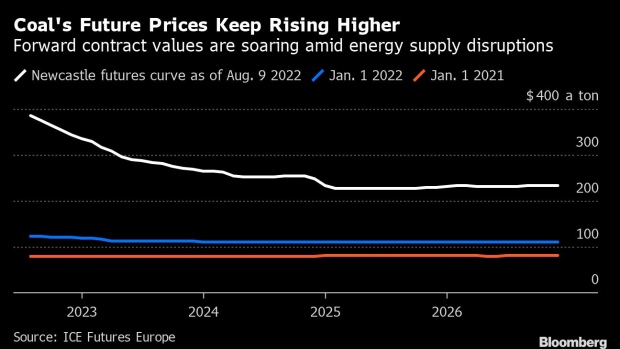 (Bloomberg) -- Coal’s remarkable rise from a fuel left for dead to one of the world’s hottest commodities is likely to last for years.

Europe’s plans to wean itself off Russian fuels will support the coal market in two distinct ways, both of which should keep prices of seaborne cargoes inflated for the near future, according to Fitch Solutions analysts.

The EU’s ban on Russian coal that begins this month will boost demand for imports from other countries like Indonesia and even Australia. Meanwhile, plans to replace Russian pipeline gas imports with liquefied natural gas shipments will leave less fuel for other nations, forcing them to use more coal.

Fitch “substantially” lifted its Asian thermal coal price forecast for this year and beyond. It now expects the fuel loaded at Australia’s Newcastle port to average $320 a ton this year and $246 a ton on average from 2022 to 2026, up from previous outlooks of $230 and $159, respectively.

Asian coal prices hit a record earlier this year after Russia’s invasion of Ukraine exacerbated an already tight market. Miners are struggling to keep up with the surge in demand as utilities rush to secure fuel.