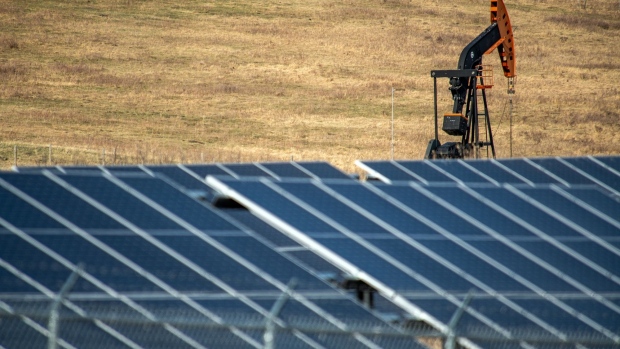 An oil pumpjack behind a bank of solar panels near Longview, Alberta, Canada, on Tuesday, April 26, 2022. Prime Minister Justin Trudeau’s government wants a 42% reduction in emissions from the oil and gas sector as part of Canada’s plan to meet its 2030 emissions-reduction goal. Photographer: James MacDonald/Bloomberg , Bloomberg

Edmonton, Alberta-based firm issued C$350 million ($270.3 million) of 60-year securities with a call option after 10 years, according to people with knowledge of the matter. The notes were priced at the tight end of yield range between 7.95% and 8% the people said.

The firm went ahead with the deal after holding an investor call on the green financing framework released early this week, according to people familiar with the matter. Chief Financial Officer Sandra Haskins was scheduled to speak during the call, the people said.

Capital Power, which operates 27 facilities across Canada and US, plans to use the proceeds of its green debt transactions to finance or refinance its solar and wind power projects as well as energy storage projects, according to a second party opinion issued by Sustainalytics. While it’s the issuer’s first green bond deal, the company has already signed a C$1 billion ($775.6 million) sustainability-linked loan.

Before Capital Power’s hybrids, sales of environmental, social and governance bonds in Canadian dollars from companies and public sector issuers stood at C$16.4 billion so far this year, down from record C$18.6 billion in the same period a year earlier as global bond market yields jumped with central banks tightening policy in a bid to cool off inflation. While no green hybrid had been previously issued in loonies, other utilities such as Germany’s EnBW Energie Baden-Wuerttemberg AG and Spain’s Iberdrola SA have issued that type of debt, according to Bloomberg data.

Bank of Montreal, the structuring agent of the utility’s green financing framework, as well Royal Bank Canada and Bank of Nova Scotia arranged the transaction. Capital Power confirmed its intention to issue the notes in a statement earlier Thursday. Representatives for BMO, RBC and Scotiabank declined to comment.

Early this month, AltaGas Ltd priced C$250 million of 60-year hybrid bonds with a call option after five years to yield 7.35%, Bloomberg data show. The notes are rated by S&P Global Ratings at BB, or two levels below investment grade, and the same grade as Capital Power’s new hybrid bonds.

Capital Power gathered orders for around two times the deal’s size from more than 50 investors. That compares to 46 buyers and order books of more than 3.3 times for the AltaGas hybrid deal, according to people familiar with the matter.

Firms sell hybrid securities to beef up their balance sheets because rating companies treat them partly as equity. Investors in such bonds effectively take on the second-most risk after stockholders because the securities are subordinate in payment priority to more senior layers of debt.