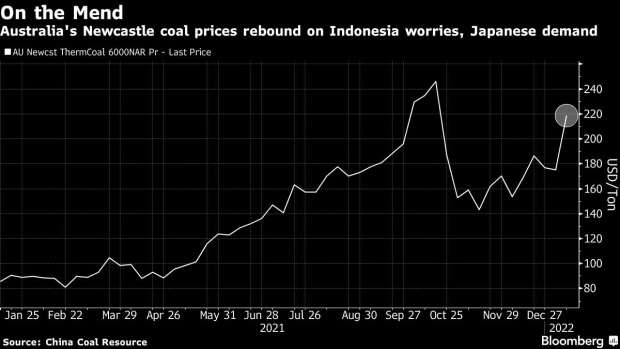 Conveyors and stacker-reclaimers stand next to stockpiles of coal at the Port of Newcastle in Newcastle, New South Wales, Australia, on Monday, Oct. 12, 2020. Prime Minister Scott Morrison warned last month that if power generators don't commit to building 1,000 megawatts of gas-fired generation capacity by April to replace a coal plant set to close in 2023, the pro fossil-fuel government would do so itself. Photographer: David Gray/Bloomberg , Bloomberg

(Bloomberg) -- Coal prices are surging as traders in Asia scramble to snatch up winter supply amid fears of delayed deliveries from Indonesia and as a global energy squeeze continues.

At least one cargo of Australian coal for February loading changed hands at $300 a metric ton on Friday, according to traders who saw the transactions on the globalCOAL platform. That’s one of the most expensive cargoes ever transacted, the traders said, and could push spot price indexes above last October’s record high.

The seaborne thermal coal market has been in disarray since Indonesia, the world’s biggest exporter, announced it would halt exports for January so it could replenish stockpiles at fuel-starved power plants. While the country has since released a limited number of shipments, the move has nonetheless triggered some spot buying to cover delivery delays, a trader said.

In particular, Japanese utilities have been in the market seeking to purchase coal for February and March delivery, but there hasn’t been very much spot supply available in the Pacific, two traders said.

It’s the second price surge in a matter of months for coal. Last fall, shortages in China led to widespread power curtailments in the world’s No. 2 economy, resulting in record imports that pushed prices to all-time highs. A historic boom in domestic production helped cool off prices by the end of the year.