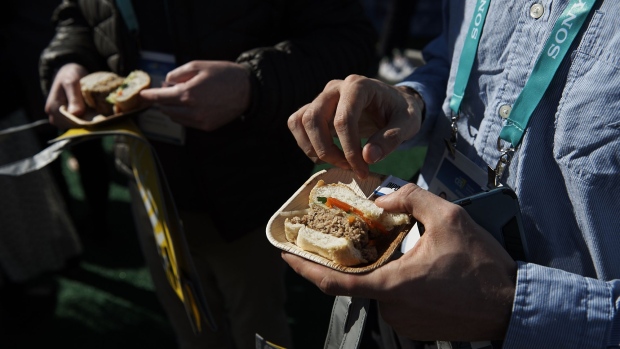 An attendee holds a sandwich made with plant-based pork product served at the Impossible Foods Inc. booth during CES 2020 in Las Vegas, Nevada, U.S., on Tuesday, Jan. 7, 2020. Every year during the second week of January nearly 200,000 people gather in Las Vegas for the tech industry's most-maligned, yet well-attended event: the consumer electronics show. Photographer: Bridget Bennett/Bloomberg , Bloomberg

Plant-based meat producer Impossible Foods Inc. said it raised US$200 million in its latest funding round, bringing the total investment raised by the company to nearly US$1.5 billion.

The new investment will be used for research, product development, international operations and other core functions, the company said in a statement. New investor Coatue Management LLC led the round, and Mirae Asset Global Investments, Temasek Holdings Pte and XN Capital also participated.

The funding round comes as Impossible Foods and its competitors aggressively push into supermarkets as the pandemic disrupts meat supply chains and shutters restaurants. This has driven plant-based demand at retail outlets, while simultaneously curbing it at eateries.

“There’s no question that our customers in food services have suffered” with lockdown measures to halt the spread of Covid-19, he said. “We have to focus on where the meat eaters are going, which is now the grocery store.”

In July, Impossible Foods expanded into the world’s largest retailer, Walmart Inc., selling the product at more than a third of its total U.S. locations.

When asked about a potential initial public offering, Lee said the company isn’t ready to announce anything, but “will not forgo any strategic options.”

Lee added that the funding round will help Impossible Foods, based in Redwood City, California, drive down the cost of its products.

“We want to be at the same cost as commodity ground meat or commodity steak if we enter that market,” Lee said. “We need scale, so a big part of today’s announcement is to fund, to get to that scale.”

Impossible Foods’ valuation was about US$4 billion in a March funding round, according to Bloomberg News.