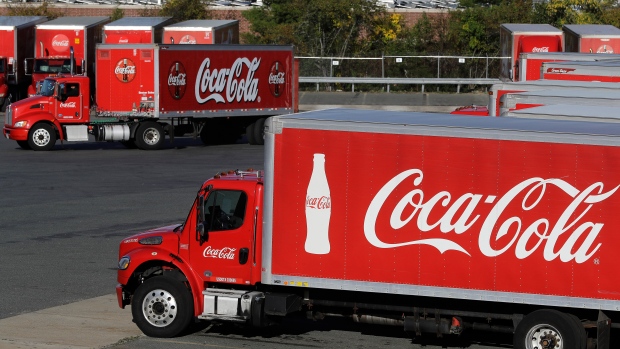 In this Oct. 14, 2019 file photo a truck with the Coca-Cola logo, behind left, maneuvers in a parking lot at a bottling plant in Needham, Mass. , The Associated Press

TORONTO - More Coca-Cola beverages will soon be rolling off assembly lines in Quebec and Ontario as one of the company's independent bottlers moves more of its production work to Canada.

Coca-Cola Canada Bottling Ltd. said Thursday that it will spend more than $35 million in an expansion plan that will see some of its manufacturing moved from the U.S. to the Greater Toronto Area and Montreal.

"These investments are critical to our mission and will help us increase our owned manufacturing capabilities in the Greater Toronto Area for many years to come," said the company's chief executive Todd Parsons, in a release.

The company plans to spend $17 million on its Weston plant for new equipment that will help it respond to the growing demand for carbonated beverages.

The equipment is expected to be in use by the first quarter of next year with full production timed for the spring.

Many of the products the equipment will be used on are currently being manufactured in the U.S., Parsons said.