Coca-Cola Co.’s sales beat expectations in the second quarter and the soda maker raised its revenue forecast for the year as it saw a significant bounce back in its business, a stark contrast to the pandemic-related lockdowns that diminished sales last year.

Coke’s organic revenue, which excludes the impact of currency or acquisitions, climbed 37 per cent in the quarter ended July 2, the Atlanta-based company said in a statement Wednesday. Analysts had been expecting 29.3 per cent growth, according to forecasts compiled by Bloomberg. Earnings of 68 cents a share topped analysts’ estimate of 56 cents. 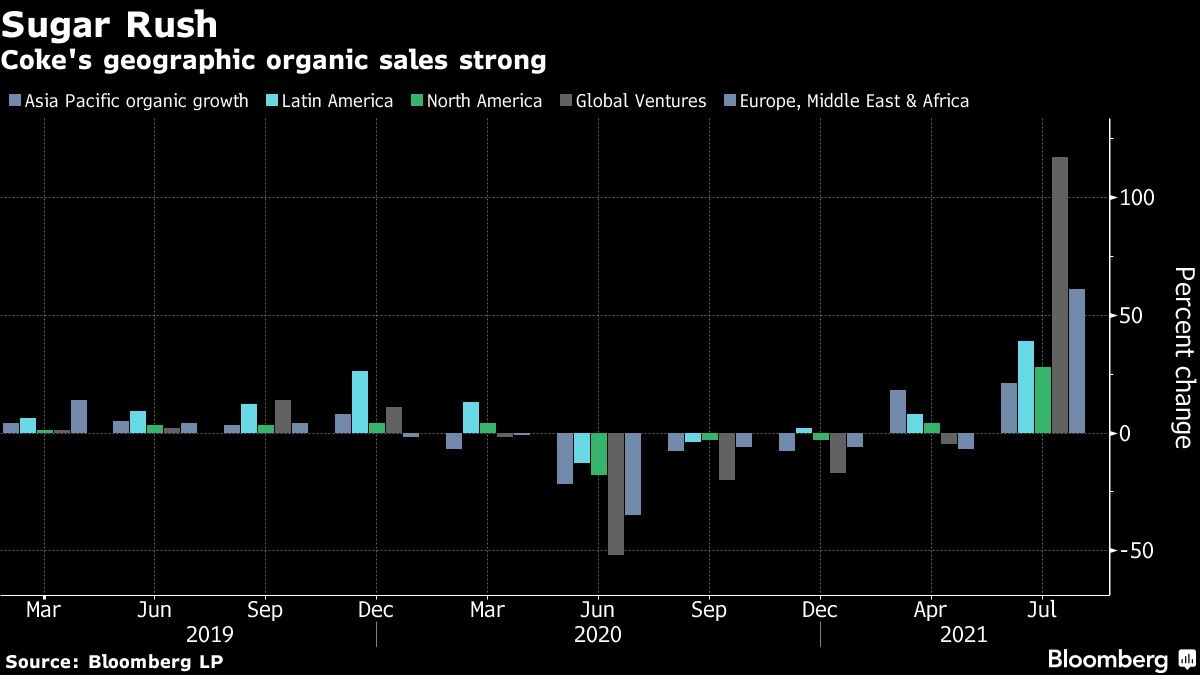 “Our results in the second quarter show how our business is rebounding faster than the overall economic recovery,” Chief Executive Officer James Quincey said in the statement. The company in particular cited a rebound in “away-from-home channels” as pandemic restrictions eased, sending sales above 2019 levels.

The results are evidence that consumers who were locked down in their homes during the same period last year are returning to reopened restaurants, amusement parks and stadiums -- all of the on-premise public venues where the company’s soft drinks are poured.

With some parts of the world impacted by low vaccination rates and new strains of the virus, Coke said that although its global unit case volume was benefiting from the recovery in many markets, the improvement was offset by a resurgence of the virus in several areas. Unit case volume grew 18 per cent overall, climbing 17 per cent in North America and 21 per cent in the Europe, Middle East and Africa region.

Like other soft-drink makers, Coke is feeling the effects of inflated pricing of commodities and materials. Chief Financial Officer John Murphy said the company is comfortable that it can hedge against those pressures for now but is less certain about next year.

One key ingredient the soda maker will use to recover from the pandemic is consumer pricing, Murphy said. On a two-year basis, from the pre-pandemic levels of 2019 through 2021, prices on Coke’s products will have risen 2 per cent to 3 per cent, Murphy said.

“We actually feel pretty good with where we’re going with pricing,” he said. “We will stay on pace with inflation, but at the same time, make sure our portfolio prices are attractive to the consumer.”

The company raised its forecast for full-year organic sales growth to a range of 12 per cent to 14 per cent, from a prior expectation of high single digits. Comparable earnings per share could rise as much as 15 per cent, Coke said, up from a prior outlook of no more than low double digits.