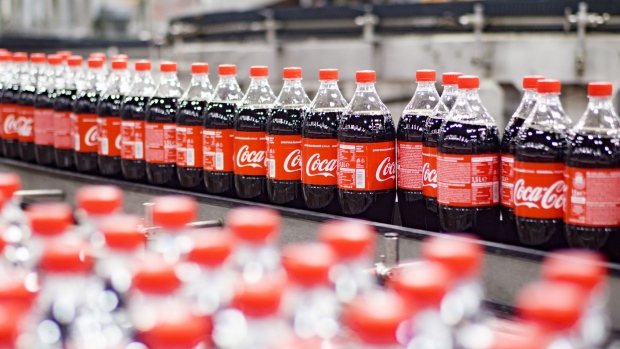 Plastic bottles of Coke soda move along the automated production line at the Coca-Cola Hellenic Bottling Co. SA plant in Brovary, Ukraine, on Wednesday, May 10, 2017. Heineken NV, Coca-Cola HBC AG and Castel Group are among companies bidding for a majority stake in Coca-Cola Beverages Africa, according to people familiar with the matter. Photographer: Vincent Mundy/Bloomberg , Bloomberg

(Bloomberg) -- Coca-Cola Co. is seeking a value of 7 billion euros ($8.1 billion) for Coca-Cola Beverages Africa when it lists the bottler next year, according to people familiar with the matter.

The soft drinks giant is poised to appoint Bank of America Corp., Morgan Stanley and Standard Bank Group Ltd. to run the initial public offering, the people said, asking not to be identified discussing confidential information. More banks could get added to the roster in the coming weeks, the people said.

Deliberations are ongoing and the final timing and size of the IPO will depend on investor appetite and market conditions, according to the people. A representative for Coca-Cola referred a request for comment to the Africa business. Representatives for Bank of America, Coca-Cola Beverages Africa, Morgan Stanley and Standard Bank declined to comment.

Coca-Cola holds 66.5% of Coca-Cola Beverages Africa, having paid $3.15 billion in 2016 to buy Anheuser-Busch InBev out of the African bottling joint venture.

It tried to offload the stake a year later and drew interest from the likes of Heineken NV and Coca-Cola HBC AG, Bloomberg News reported at the time. In April, Coca-Cola said it was working with Rothschild & Co. on an IPO of the business, with shares to be listed in Amsterdam and Johannesburg.

Coca-Cola Beverages Africa operates in 14 territories on the continent and accounts for about 40% of the Atlanta-based company’s drinks sold there, according to its website. Coca-Cola concluded a deal earlier this year to increase local shareholding in its South Africa bottling unit.

Companies have raised about $73 billion from IPOs on European exchanges this year, according to data compiled by Bloomberg, with the deals outpacing stake sales for the first time since 2018.