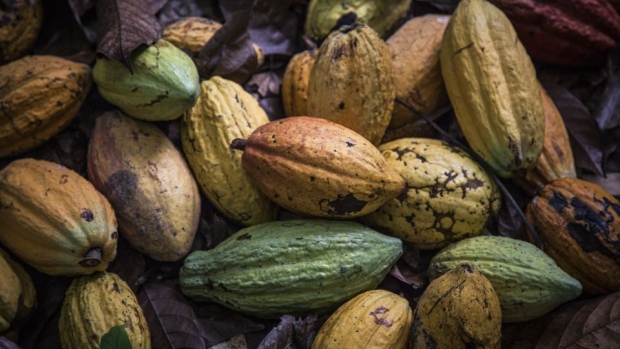 Cocoa fruit sit on the ground during harvesting on a cocoa plantation in Agboville, Ivory Coast. , Bloomberg

A price dispute between the world’s top cocoa producers and some of the biggest traders is roiling the New York market.

Traders are resorting to cheaper beans that back contracts on the ICE Futures U.S. exchange instead of buying directly from Ivory Coast and Ghana after the top producers teamed up to charge more for their cocoa, a move some traders compared to the OPEC oil cartel. That’s driven December futures to a record premium over the next contract.

The sudden shift comes as the coronavirus pandemic slashed demand, curbing profits for processors and chocolate makers. While many had initially agreed to pay the high prices, lockdowns from Paris to Los Angeles now mean they don’t need as much cocoa or need to seek cheaper supplies, said Judy Ganes, president of J. Ganes Consulting.

“The cocoa market has become a battleground,” said Ganes, who has followed markets for more than 30 years, with roles at Wall Street giants Morgan Stanley and Merrill Lynch. “Buyers are left in an uncomfortable position and tried to renegotiate the deal with asking for the premiums to be lowered. They were denied. This makes the cocoa in certified stock comparatively cheap.” 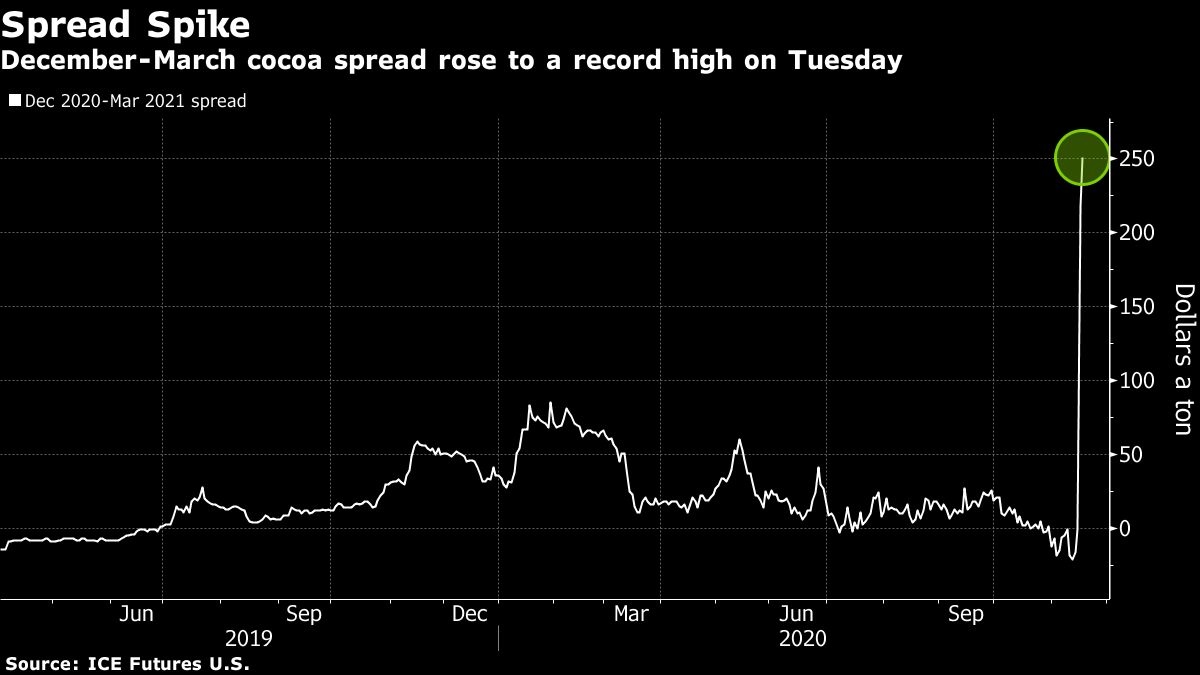 Ivory Coast and Ghana, which account for almost 70 per cent of global production, last year agreed to charge a premium of US$400 a ton over futures prices to help income for growers. That came on top of a quality fee depending on where the cocoa comes from. The unprecedented step to exert more control over prices had traders comparing the initiative to the OPEC cartel in crude oil.

Foreign shippers in Ivory Coast halted cocoa purchases, insisting on a discount to the country-quality fee due to slowing demand, people familiar with the matter said last month. In Ghana, there’s also been resistance to paying this fee, a person familiar with the matter said. It’s harder for companies to fight the so-called Living Income Differential, which is supposed to help improve livelihood of farmers, many of which live in poverty.

With such hefty prices charged by the top producers, traders are turning to New York cocoa. Starting Friday, December futures jumped to as much as US$260 a ton more expensive than the March contract from a discount of US$16 the day before. The surge continued Monday, the first day traders had to notify counterparties they intend to take physical delivery to settle contracts expiring Dec. 15, with the spread settling at US$251.

“Aggressive buying to take this cocoa has pushed up the spot contract with the short holders forced to scramble,” Ganes said. “Obviously a squeeze play, but what happens next in this cocoa war? There is plenty of other cocoa available in the market. Buyers can use Ivory Coast as a residual source, mopping up other cheaper cocoa first.”

Traders prefer to take delivery in the New York market -- which only accepts beans in bags -- despite lower prices in London, where delivery can be made in 1,000-metric ton piles of Cameroon cocoa, a quality that not many processors can use in large quantities.

Ivory Coast and Ghana still have a lot of cocoa from the current crop yet to be sold, putting them in a more vulnerable position. To try to resolve the standoff with traders, the countries are threatening to suspend sustainability programs, a tactic that in the past worked out as chocolate makers fear consumer backlash.

“They are going to try to use this as leverage,” Ganes said. “But with a pandemic cutting demand, I don’t think that are in a strong position to do so.”