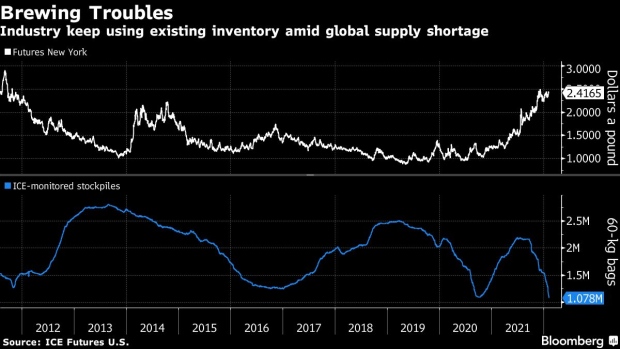 (Bloomberg) -- The era of expensive coffee is not going to end any time soon, judging from dwindling amounts held in reserves.

Stockpiles of high-end arabica beans, a favorite of artisan coffee shops and chains like Starbucks Corp., totaled 1.078 million bags or about 143 million pounds, according to data released Monday by ICE Futures U.S. exchange. That’s the lowest level for inventories monitored by the New York exchange since February 2000.

Coffee reserves certified by ICE have been falling since September due to soaring shipping costs and unfavorable weather that clipped production in Brazil, the world’s largest grower and exporter.

Shrinking inventories are a concern because countries tap them when they aren’t getting enough product from overseas. It’s a sign that demand is outstripping supplies, and a condition for rising prices. Coffee prices have already been touching multiyear highs at a time when food inflation is gripping the globe.

“Low stocks at the exchange is one of the bullish factors adding to the coffee rally,” said Fernando Maximiliano, an analyst at StoneX in Sao Paulo, Brazil.

Right now, it’s more attractive for Brazilian producers to sell into the domestic market rather than pay high shipping costs to deliver the commodity at the exchange, according to Maximiliano.

Brazil currently accounts by 39% of the inventories monitored by ICE, down from as much as 55% last year.

(Updates with Brazil share on iventories in the last paragraph)