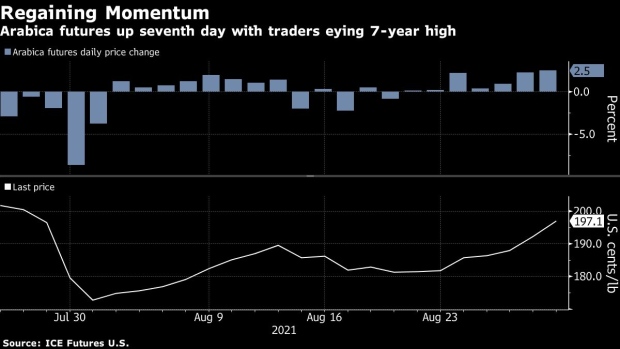 Arabica coffee for December delivery rose as much as 3.2% in New York to $1.983 a pound on ICE Futures U.S., the highest for a most-active contract since since late July. The beans favored by Starbucks Corp. are headed for a 10% gain in August, and are up 53% in the past year after a drought in 2020 curbed the outlook for Brazilian production in 2021.

“The main driver is Brazil’s forecast,” said Hernando de la Roche, senior vice president for StoneX Financial Inc. in Miami. “This will remain a weather market for the next few weeks,” at least until the typical arrival of the rainy season by the second half of September. Traders are weighing that against potential impact of Covid variants on the economy and demand,  he said.

Brazil isn’t the only coffee giant with problems. Too many cloudy days have hindered crops in Colombia, the second-biggest shipper of arabica, and Covid-related lockdowns are curbing export flows out of Vietnam, the biggest exporter of robusta beans traded in London, where markets are shut Monday for a holiday.

Arabica is still down from the seven-year high hit last month after three frosts slashed prospects for 2022-23, leaving trees dehydrated and burned.

“Prices seem to have regained upside momentum and could be heading back to a retest of their late July highs,” according to the Hightower Report in Chicago.

In other soft commodities, raw sugar for October delivery gained 0.8% to 20.2 cents a pound in New York, and is heading for a monthly jump of nearly 13%. Even with the higher costs, there are signs of demand, with Egypt recently buying 200,000 tons of Brazilian raw sugar.

Minor cane regions of Louisiana probably were hurt by Hurricane Ida, which made landfall over the weekend in the state, the second-largest U.S. sugarcane grower.