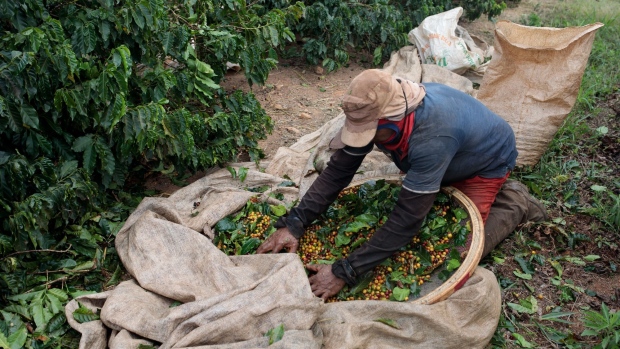 A worker separates coffee cherries during a harvest on a farm in Guaxupe, Minas Gerais state, Brazil, on Wednesday, June 2, 2021. The severe drought in agricultural powerhouse Brazil is shaking up the world's crop markets again, this time because farmers in the top exporting country are finding they can't meet sales agreements made months ago. Photographer: Patricia Monteiro/Bloomberg , Bloomberg

(Bloomberg) -- World coffee buyers aren’t doing enough to help growers make a living income, and current practices actually keep most farmers below the poverty line, according to a new study by the Columbia Center on Sustainable Investment.

Research focused on the impact of sourcing practices on producer and farmworker income and well-being. It analyzed practices among 10 of the largest coffee roasters and retailers, including Nestle SA, JDE Peet’s NV, J.M. Smucker Co., and Starbucks Corp.

“While all of the companies have established sustainability commitments or projects relevant to producers, none are able to guarantee that all viable producers in their supply chains earn a living income,” the study’s summary said. “All could do more within their sourcing practices to positively influence producer prosperity.”

The research also showed deep gaps between current coffee incomes and estimates of living incomes for the 10 largest producing nations. In eight out of 10, average income from the beans is at or below the poverty line. Only in top shipper and grower Brazil does the average farmer net enough that is above some living-income estimates, the group said in a summary of findings.

Uganda had the largest gap, with an average producer earning $88 a year from coffee, relative to living-income reference values that range from more than $2,000 to almost $6,000.

Among major commodities, coffee has the most widespread use of certifications and verifications under a Voluntary Sustainability Standard, or VSS. Still, the study said there’s “no evidence” that the use of these programs, for which farmers pay a fee to certifying companies, enables most to achieve a living income.

“This means that claims of 100% responsible sourcing” that rely on VSS don’t indicate anything about whether farmers or farmworkers can achieve an adequate standard of living, the researchers found.

The report comes amid a supply shock to world markets, after freeze and frost damaged significantly Brazilian crops las week, sending prices soaring. Meantime, the top supplier in Central America, Honduras, is struggling to recover from hurricane and Covid impact amid low prices that have discouraged in recent years farm investment.

The other companies whose sourcing practices were included in the study were Lavazza, Tchibo, Keurig, Costco Wholesale Corp., Tata and Unilever Plc.