Arabica coffee fell the most in more than a dozen years, paring a monthly surge as concerns eased that severe weather will further damage crops in top shipper Brazil.

Frost overnight reached about 80 per cent of south Minas Gerais, the country’s top producing region, but the impact was less than feared, according to Drew Lerner, president of World Weather Inc. The area may get “patchy frost” Saturday and Sunday. Most sugar and citrus areas were spared the worst readings, and any impact was probably localized, Lerner said.

“Any losses from today’s event will be very limited,” said Carlos Mera, head of agricultural research at Rabobank International. “However, we still see some potential for frosts in the coming three days.”

Even with Friday’s drop, the risk persists that consumers will see higher coffee prices at cafes and supermarkets when global food prices in general are on the rise. A recent cold snap in Brazil is a fresh blow to crops strained by recent drought and the worst frost seen in two decades. Freezing weather could squeeze global coffee supply for years, as it is particularly harmful for young trees.

Arabica coffee for September delivery tumbled 8.6 per cent to settle at US$1.7955 a pound, the biggest drop since March 2008. The price is still up 12 per cent in July and more than 55 per cent in the past 12 months after adverse weather cut 2021 output and curbed the outlook for next year.

Pressure came in also from the foreign exchange markets. The Brazilian real fell the most against the U.S. dollar in almost two weeks, boosting incentives for growers to sell commodities priced in the greenback. There are also signs that other countries are taking advantage of the higher prices to sell. 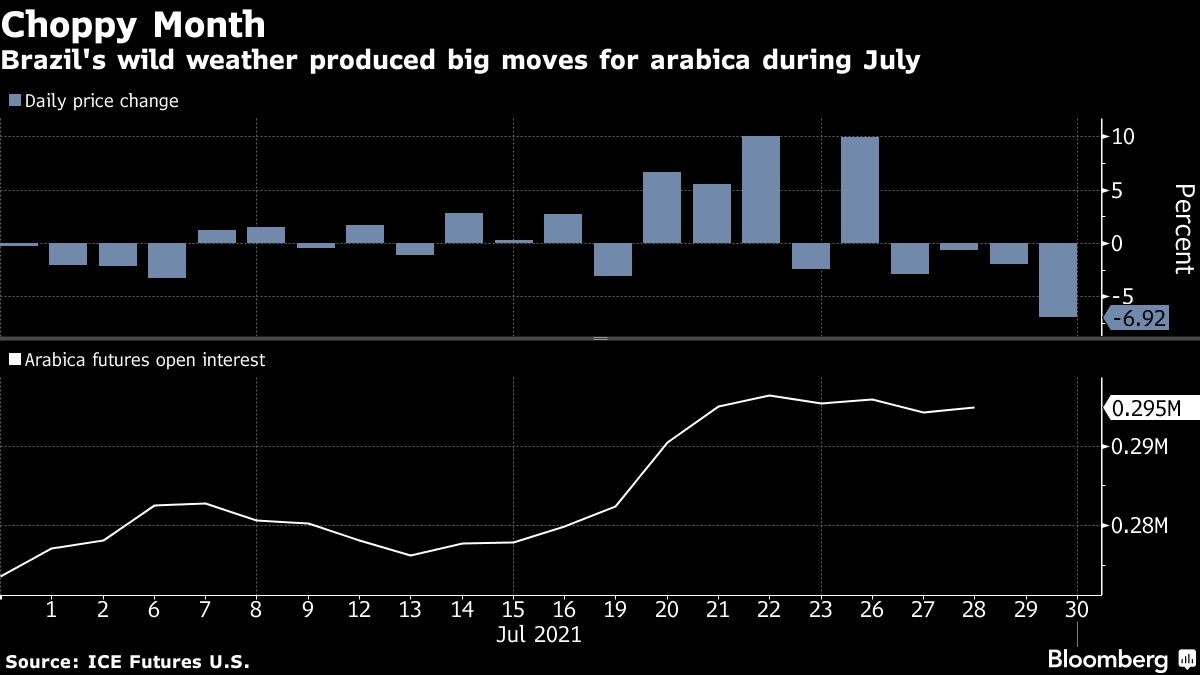 Trees in south Minas Gerais have been “affected significantly, and will struggle to recover for next year’s crop,” Lerner said. “The stress will be very high, it hasn’t been this cold in many, many years and the ground is already dry.”

Dry conditions make it more critical for the timely arrival rains by September, which could be delayed by La Nina’s return, he said.

“Brazil’s upcoming 2022/23 output has clearly been reduced by this month’s cold weather, so traders may use a sizable near-term pullback for a fresh opportunity to establish long positions,” according to the Hightower Report in Chicago.

In other soft commodities, raw sugar for October delivery slid 2.1 per cent to 17.91 cents a pound in New York. Orange juice for September delivery slumped 2.7 per cent to US$1.3295 a pound, reducing its July rally to 8 per cent.