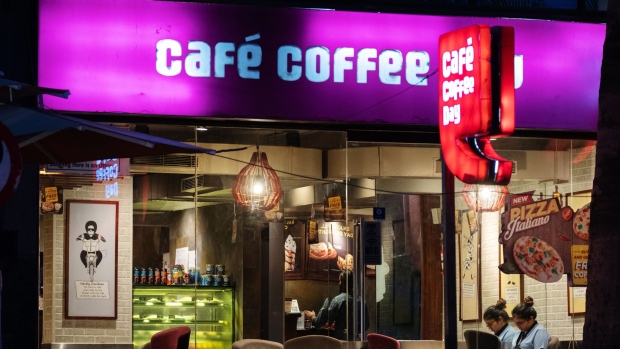 Customers sit inside a Cafe Coffee Day coffee shop, operated by Coffee Day Enterprises Ltd., in Bengaluru, India, on Wednesday, July 31, 2019. V.G. Siddhartha, the founder of India’s biggest coffee chain, has been confirmed dead days after he purportedly wrote a letter indicating he was anxious about pressure from banks, investors and the tax authorities. , Karen Dias/Bloomberg

Even before the body of coffee-chain tycoon V.G. Siddhartha was recovered from a river in southern India this week, the financial strains that appear to have led him to take his own life were beginning to emerge.

A letter purportedly written and signed by Siddhartha and sent to senior management of Coffee Day Enterprises Ltd. laid out in stark words his struggles with a “serious liquidity crunch” that in turn had led to “tremendous pressure” from lenders and an unnamed private-equity investor.

“I would like to say I gave it my all,” Siddhartha wrote. “I am very sorry to let down all the people that put their trust in me. I fought for a long time but today I gave up.” He sent the note to the board on July 27. Two days later, the executive was reported missing after telling his driver he’d go for a stroll.

Siddhartha’s death marks a tragic turn for an admired member of India’s business elite and an executive closely connected to the highest echelons of the political sphere. Over the course of more than two decades, Siddhartha built a java empire that now boasts more than 1,700 stores -- ten times as many outlets as Starbucks Corp. (SBUX.O) in India -- as well as 54,000 vending machines, almost single-handedly introducing his tea-loving country to coffee shops and making his Cafe Coffee Day chain a household name.

But what was less known was that for all his company’s scale and ubiquity, Siddhartha struggled with a mounting financial burden. A review of the public disclosures of Siddhartha’s personal debt reveals how he spent much of the two years before his death putting up ever more of his Coffee Day shares to refinance loans for ever shorter periods, at ever higher rates of interest.

At Coffee Day itself, short-term debt more than doubled in the financial year ended March. Siddhartha spent most of his last two weeks in Mumbai trying to raise funds to pay down debt, according to a person familiar with the matter. He had payments due in July and August, the person said. Coffee Day’s board held an emergency meeting on July 30, saying it’s confident that it can “ensure continuity of all business operations consistent with past behavior.”

The apparent suicide of the Indian entrepreneur has touched a nerve with the corporate elite of India, where business leaders face mounting strain from an economy-wide cash crunch and slowing growth. The anxiety laid out in Siddhartha’s letter, with multiple references to pressure from lenders and stakeholders, is an unwelcome scenario for Prime Minister Narendra Modi as he begins his second term with promises to turn India into an economic powerhouse, even as its commercial engine shows increasing signs of sputtering.

“If it’s not just Cafe Coffee Day, and there are 100 other enterprises where people are driven to extremes, or where the company goes under because they’re not getting refinanced, then it’s a crisis.” said Madan Sabnavis, chief economist at credit-rating agency Care Ratings Ltd. “This is not something which is sustainable, because we’re in a situation where we all know the economy is stagnating.”

India’s economy, the third-largest in Asia, has lost momentum, with growth slowing for a fourth straight quarter in the three months to March. Creditors remain wary after the collapse last year of non-bank lender Infrastructure Leasing & Financial Services Ltd. compounded bad loan problems. In response, the Reserve Bank of India was the first of the world’s major central banks to cut interest rates this year.

Indian media was already full of stories of farmers committing suicide after they were left unable to refinance loans amid a crash in crop prices. But the fate of the founder of one of India’s best-known companies shows how the issue is affecting not just humble labourers, but extending into the executive suite. In his letter, Siddhartha said he had to borrow a large sum of money from a friend to help complete a buyback of shares, which he says a private-equity investor had pressured him to implement.

By Thursday the impact of Siddhartha’s case was being felt in India’s parliament, where Finance Minister Nirmala Sitharaman defended the bankruptcy code her government introduced in 2016, and has been tweaking through amendments ever since in the face of frequent legal challenges and criticism.

“Business failure in this country should not be taboo, it should not be looked down upon, it should not be treated as a curse,” Sitharaman said, referring to what she called “an entrepreneur taking an unfortunate end to the problem by committing suicide.” “On the contrary, through proper, legitimate resolutions he should get an honorable exit from the business.”

Originally an investment banker, Siddhartha was born in India’s coffee heartland of Chikmagalur to a family of coffee planters, and founded his chain in 1996 to keep programmers in India’s IT hub Bengaluru caffeinated, more than a decade before Starbucks entered India. The married father of two was known to work as a barista or waiter in one of the cafes of his far-flung empire to gain a better insight into the needs of his customers and the lives of his staff.

Siddhartha was reported missing on July 29 near the southern Indian city of Mangaluru. Following an intensive search, authorities found Siddhartha’s body Wednesday morning in the Netravati river. Police have yet to provide details on the circumstances of his death.

The tragedy surrounding Siddhartha comes as non-bank financial corporations -- one of the main sources of credit for the economy -- are more focused on fire sales to stay afloat than on lending. With India’s banks themselves still weighed down by the biggest pile of soured loans in the world, policy makers have been left scrambling to avoid contagion, as everyone from family businesses to major corporations struggle to secure loans.

Though the full picture of Siddhartha’s private finances has yet to emerge, the material that is public indicates he was caught in the wider crunch. In his letter to the board, Siddhartha laid out the value of his various businesses, saying that assets outweigh liabilities.

Disclosures made to the Indian government from four companies Siddhartha and his family used to hold part of their Coffee Day shares show how in the last year, lenders started demanding those shares as collateral where they hadn’t needed them before, and new loans carried interest rates as high as 14%, even when that collateral was provided.

Amid the tightening financial conditions, 76% of Siddhartha and his family’s total shares in the company had been put up as collateral for loans by June of this year, from 60% a year before, filings with the stock exchange show.

The letter attributed to Siddhartha sketches out how the situation apparently deteriorated further, with one of Coffee Day’s private-equity investors “forcing” him to buy back the company’s shares, and “harassment” by the income tax authorities which delayed a needed infusion of funds from the sale of shares in a tech company he owned, creating a “liquidity crunch.”

In response to the letter, the income tax departments of the states of Karnataka and Goa released a statement saying Siddhartha had admitted to unaccounted income of 3.6 billion rupees (US$50 million), and that they had halted his sale of the tech company’s shares until he put up Coffee Day shares as collateral for the unpaid tax, which he did.

In a statement Wednesday, Coffee Day’s board said it is constituting a committee to find ways to reduce debt, and will investigate the transactions alluded to in the letter.

“The liquidity crunch is for real,” said Sanjiv Kaul, a partner at Mumbai-based private-equity firm ChrysCapital Management Co. “We all talk about farmer suicides in India, but how many of us take cognizance of failed business related suicides? Entrepreneurs are very passionate, and more often than not, very lonely at the top.”

--With assistance from Saritha Rai.