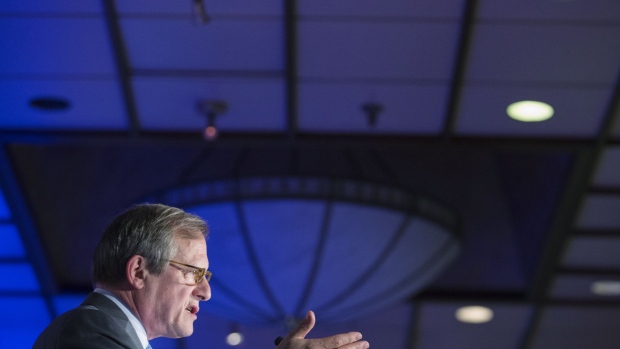 Louis Audet, president and chief executive officer of Cogeco Communications Inc., speaks during the International Economic Forum Of The Americas (IEFA) in Montreal, Quebec, Canada, on Wednesday, June 13, 2018. The conference strives to foster exchanges of information, to promote free discussion on major current economic issues and facilitate meetings between world leaders to encourage international discourse by bringing together Heads of State, the private sector, international organizations and civil society. , Bloomberg

Cogeco Communications Inc.’s acquisition of Quebec’s third-largest cable provider is “not the type of shareholder-friendly initiative” investors are looking for after the company rejected a takeover bid, a veteran Bay Street analyst says.

Cogeco said Wednesday it will buy Dery Telecom Inc., which has about 100,000 customers in the Canadian province. The $405 million (US$308 million) transaction, which will be financed with cash on hand and a loan, is an opportunity to expand its service in rural areas, Cogeco said.

“To be clear, this relatively small acquisition at a premium valuation is not the type of shareholder-friendly initiative that we would expect Cogeco to put forward as an alternate course of action to accepting a $150 takeover offer,” Valentini wrote, referring to price per share of a hostile bid by Altice USA Inc.

Altice has offered to buy Cogeco Communications and parent Cogeco Inc. for US$8.4 billion, with a plan to offload the Canadian assets to Rogers Communications Inc. But the boards of both Cogeco companies have rejected the offer and the Audet family, which controls the group with a majority of Cogeco Inc.’s voting rights, has said it’s not interested in selling.

Altice is offering to pay $123 a share for Cogeco Inc. and $150 a share for Cogeco Communications. That’s a premium of more than 50 per cent over where the shares of both companies closed on Sept. 1, the day before Altice and Rogers announced their plan.

“The controlling family unfortunately has the power to block that large premium deal and from shareholders from having the ability to benefit from that,” Accelerate Financial Technologies Inc. CEO Julian Klymochko said Tuesday in an interview. His firm owns a small stake in both Cogeco companies, according to data collected by Bloomberg. “It’s completely unfair and indicative of very poor corporate governance.”

Not all analysts were negative on the Dery deal. RBC Capital Markets analyst Drew McReynolds said the acquisition is complementary to Cogeco’s Canadian broadband business, “given the adjacency to the Quebec footprint, similar telecom offerings, the realization of synergies and the potential for rural extension.”

The deal is subject to regulatory approvals and is expected to close by the second quarter of the 2021 fiscal year, according to a statement.

“Our proven track record in the successful integration of regional cable businesses, having acquired five companies in the U.S. and Canada over the past five years alone, demonstrates our commitment to bring superior connectivity to regional and rural communities,” Philippe Jetté, chief executive officer of Cogeco Communications, said in a statement.