BlackRock teams up with CoinBase

Coinbase Global Inc. posted a record US$1.1 billion second-quarter loss and lower-than-expected revenue as the largest US cryptocurrency exchange was battered by tumbling digital-asset prices.

Shares of the company, which were first listed last April, dropped about 5 per cent after the close of regular trading. Coinbase has slumped 65 per cent so far this year amid what has been labeled as the latest “crypto winter.”

Revenue declined by more than 60 per cent to US$808.3 million, missing the US$854.8 million estimate from analysts polled by Bloomberg. Monthly transacting users dropped to 9 million in the second quarter, a 2 per cent decline from prior quarter. Trading volume also missed estimates, with Bitcoin’s share of trading volume rising to 31 per cent from 24 per cent. Total assets on platform plunged 63 per cent to US$96 billion.

“The current downturn came fast and furious,” the company said in a shareholder letter, adding that soft crypto market conditions are continuing into the third quarter. Core retail customers are “sitting on the sidelines” because of the downturn, Chief Operating Officer Emilie Choi said during a Bloomberg TV interview.

“Investors had expected a pretty ugly quarter on trading revenue,” said Owen Lau, an analyst at Oppenheimer & Co. In crypto winter, “the big theme is the diversification continues,” such as through staking and interest income, he said.

On full-year outlook, the company now expects 7 million to 9 million average monthly transacting users, narrowing the range from earlier forecast. That compares with the average analyst estimate of 8.7 million users.

Coinbase’s lost in the three months ended June 30 included US$446 million in impairment charges related to investments and ventures, making it the largest amount since it became a public company. Prices of many popular cryptocurrencies reached a more than 18-month low in June in the wake of the collapse of the Terra-Luna ecosystem and the bankruptcy of industry powerhouses such as Three Arrows Capital. 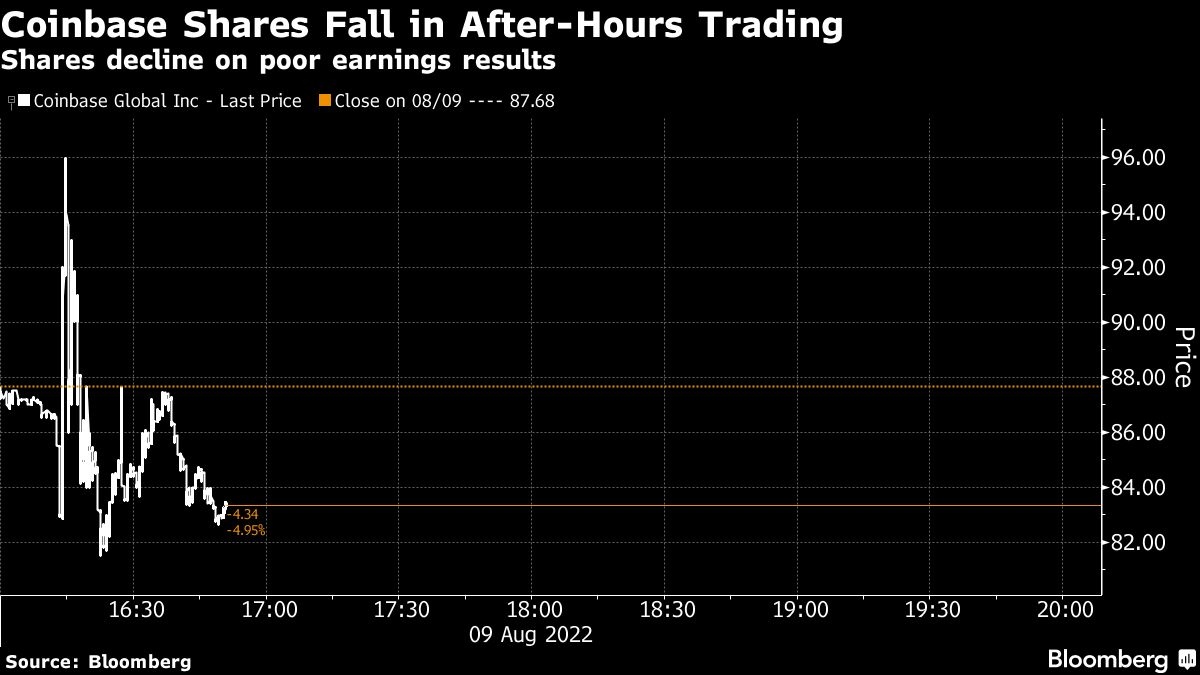 Coinbase said in May, the Securities and Exchange Commission sent a voluntary request for information on its listings and listing process, and it does not yet know if this inquiry will become a formal investigation. It is under scrutiny by the SEC for potentially making unregistered securities available for trading, Bloomberg previously reported.

“We have a zero-tolerance policy on front-running,” Choi said in regard to the case involving alleged insider trading by a former Coinbase manager.