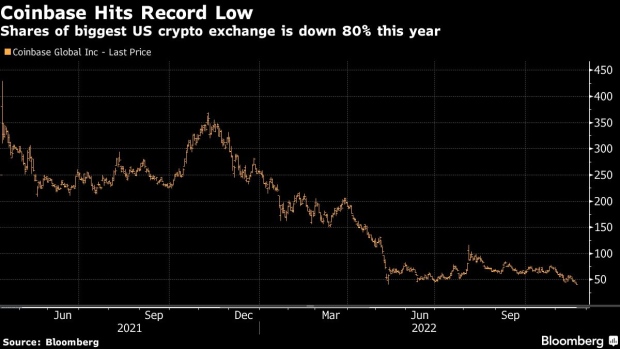 A monitor displays Coinbase signage during the company's initial public offering (IPO) at the Nasdaq MarketSite in New York, U.S., on Wednesday, April 14, 2021. Coinbase Global Inc., the largest U.S. cryptocurrency exchange, is set to debut on Wednesday through a direct listing, an alternative to a traditional initial public offering that has only been deployed a handful of times. , Bloomberg

The largest US cryptocurrency exchange’s stock dropped as much as 10.3% to $40.61 before closing down 9% on Monday, leading other crypto-related shares lower. Year-to-date, Coinbase’s shares have plunged more than 80%, while cryptocurrency bellwether Bitcoin is down 65%. Coinbase shares reached a high of $429.54 in April 2021 after making their debut on the Nasdaq.

The drop aligns with a downturn in digital asset prices, which have fallen after the collapse of Sam Bankman-Fried’s crypto empire. Bitcoin dropped as much as 4.1% to $15,589 on Monday, just short of a two-year low hit on Nov. 9. The token has tumbled around 75% from a record high of almost $69,000 reached about a year ago. Also on Monday, Ether dropped as much as 5.5%.

Shares of Marathon Digital Holdings Inc, MicroStrategy Inc., Riot Blockchain Inc. and Core Scientific Inc. all respectively dropped by as much as 10% as well.

Coinbase has 14 buy, 12 hold, and 6 sell ratings. On Friday, Bank of America downgraded Coinbase to neutral from buy.

“We feel confident that COIN is not ‘another FTX,”’ wrote analyst Jason Kupferberg in a note. “But that does not make them immune from the broader fallout within the crypto ecosystem.”

Meanwhile, Cathie Wood’s Ark Investment Management funds have purchased more than 1.3 million shares of Coinbase since the start of this month.

(Adds the closing share price in the second paragraph.)