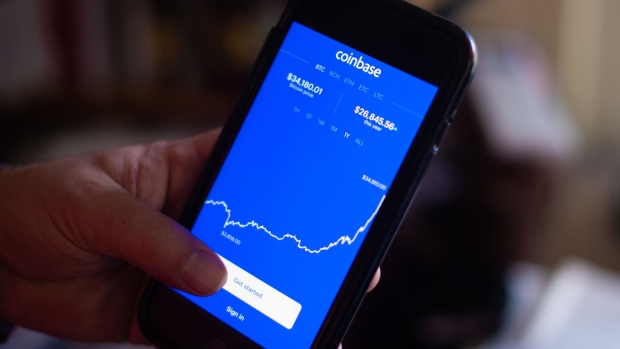 (Bloomberg) -- Coinbase Global Inc. shares changed hands at a roughly $90 billion value last week, in what could be the final chance for investors to trade its private stock before the cryptocurrency exchange goes public, according to people familiar with the matter.

That valuation is based on $350 a share, the price the stock was trading at on the Nasdaq Private Market auction that ended last Thursday, the people said, asking not to be identified because the information was private.

Thursday’s auction was the last time shares are being sold on the Nasdaq Private Market before Coinbase goes public in late March, the people said.

Some of the shares had traded at $375 earlier in the auction, which would roughly value the company at close to $100 billion, they added.

Private trading is more restrictive and volumes are usually smaller than in the public markets, and not a perfect picture of the company’s value. The Nasdaq private market is a division of Nasdaq devoted to trading shares in companies before they go public.

Ahead of the direct listing, the Nasdaq still needs to set a reference price for investors, which is partly based on private trading activity. These private trades aren’t necessarily indicative of where the stock will actually trade.

The offering will be the first major direct listing, an alternative to a traditional IPO, to take place on the Nasdaq. All such previous listings were on the New York Stock Exchange, including those by Spotify Technology SA, Slack Technologies Inc., Asana Inc. and Palantir Technologies Inc.

Coinbase won’t raise any proceeds in the transaction, according to its filings with the U.S. Securities and Exchange Commission. The company didn’t list an address for its headquarters, saying that instead it became a “remote-first” company in May.

The company swung from a loss to a profit of $322 million last year on net revenue that more than doubled to $1.14 billion, according to its filings.

Owners of Coinbase’s Class A common stock will be allowed to sell in the listing and won’t be subject to lock-up agreements. Class A stock carries one vote per share, while Class B has 20, according to the filing.