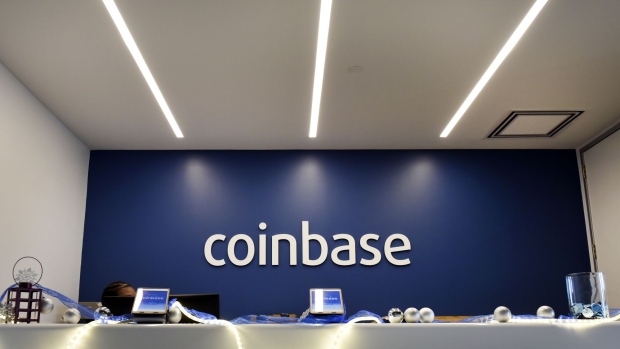 Signage is displayed at the front desk of the Coinbase Inc. office in San Francisco, California, U.S., on Friday, Dec. 1, 2017. Coinbase wants to use digital money to reinvent finance. In the company's version of the future, loans, venture capital, money transfers, accounts receivable and stock trading can all be done with electronic currency, using Coinbase instead of banks. Photographer: Michael Short/Bloomberg , Bloomberg

Coinbase Inc., the cryptocurrency exchange, is losing about 60 employees who balked at a management mandate barring political activism at work.

Chief Executive Officer Brian Armstrong said Thursday in a blog post that about 5 per cent of Coinbase employees had accepted an exit package offered to staffers bothered by the policy, and that the number will probably grow.

“There are a handful of other conversations still ongoing, so the final number will likely be a bit higher,” Armstrong said, adding that minority groups at Coinbase haven’t disproportionately taken the exit package.

Around 8 per cent of staffers had expressed interest, according to a person with knowledge of the matter who asked not to be identified, but the total isn’t expected to reach that high.

Armstrong told employees in late September that he was offering generous severance packages to those who didn’t want to comply with his prohibition on activism at work. Many staffers were shocked by the new rules, which were designed to make the company apolitical, and some were concerned that Armstrong was trying to stymie discourse that they said should be happening.

In his blog, Armstrong clarified that conversations about current events related to work are permitted.

“We have just made a decision to not engage in broader activism as a company outside of our mission,” he said. Being political about cryptocurrencies is allowed as well “because it relates to our mission,” he added.

The polarizing 2020 campaign, epitomized by last week’s acrimonious presidential debate, has left many companies struggling to stay above the fray. That may be especially hard for crypto companies, many of them started by libertarians looking to escape government influence by using digital coins.