Coinbase Global Inc. shares tumbled after first-quarter revenue missed estimates and the largest U.S. cryptocurrency exchange warned that total trading volume in the current quarter will be lower than in the first.

The company’s shares fell about 16 per cent after the close of regular trading. Monthly transacting users fell to 9.2 million, below an estimate of 9.5 million. First-quarter revenue slumped to US$1.17 billion, while analysts were expecting revenue of US$1.48 billion, according to Bloomberg data.

“We continue to see the trading volume is weak, the macro headwinds is still here, what that means is trading volume may be stagnant over the next few months or so,” said Owen Lau, an analyst from Oppenheimer & Co. Inc., who has an “outperform” rating on the shares. “If they maintain these high investments, then they may not be able to maintain profitability this year. “

Coinbase’s results came amid a sell-off of speculative assets from stocks to crypto across global markets. Bellwether Bitcoin is down more than 50 per cent since its all-time high in November, pushing many retail traders to stay on the sidelines. Coinbase earns the bulk of its revenue from trading fees, and its shares have fallen to all-time lows -- down more than 70 per cent from where they traded when the company went public a year ago. 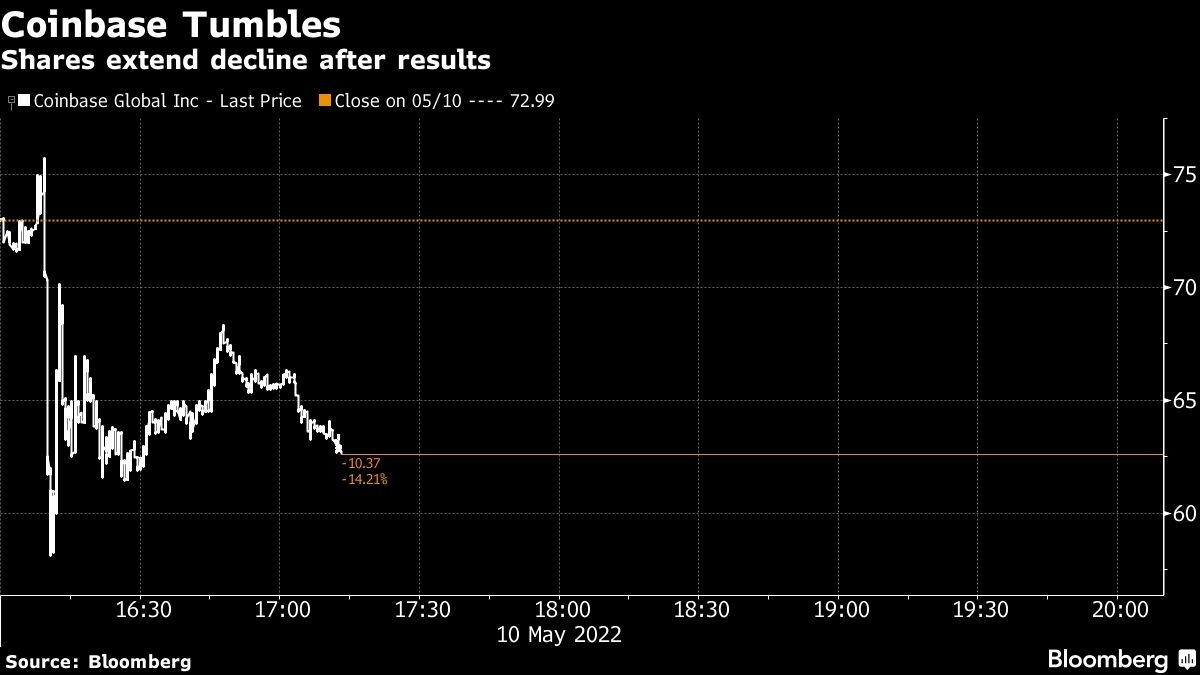 Coinbase, which made its debut in the junk-bond market last year, also saw its notes drop in secondary. Its US$1 billion of bonds due in 2031 fell 5.5 cents to 66.5 cents on the dollar, according to Trace pricing.

“We definitely see bear-market conditions, but it’s hard to call it a winter yet,” Alesia Haas, chief financial officer, said in an interview. She said the company could be slower with hiring, but hasn’t yet. The company is choosing to invest in growth this year, Coinbase executives said on its earnings call.

Coinbase expects total trading volume and monthly transacting users in the second quarter to be lower than in the first quarter, but its outlook for 2022 is “largely unchanged,” Haas said. During a prolonged bear market, the company will continue to aim to manage its full-year potential adjusted Ebitda losses to about US$500 million, it said in an investor letter.

Coinbase is working to diversify its business and to reduce its reliance on trading fees. Its staking product -- allowing users to put their coins into special yield-earning accounts -- continues to gain traction. Coinbase has also been working on launching crypto derivatives. Last week, it opened its new marketplace for nonfungible tokens -- essentially, digital art connected to blockchain -- to all users, but its uptake has been slow.

Competitive pressures in the crypto market are growing. Blockchain.com may consider going public as early as this year, Bloomberg reported earlier. Binance, the world’s biggest cryptocurrency exchange, just agreed to provide US$500 million in funding to Elon Musk’s takeover of Twitter Inc., potentially getting more access to the social media platform’s users. Decentralized exchange Uniswap is starting to see volumes that are close to Coinbase’s.