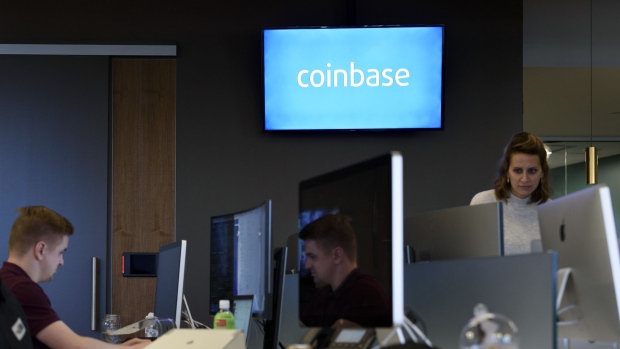 Signage is displayed on a monitor as employees work at the Coinbase Inc. office in San Francisco, California, U.S., on Friday, Dec. 1, 2017. Coinbase wants to use digital money to reinvent finance. In the company's version of the future, loans, venture capital, money transfers, accounts receivable and stock trading can all be done with electronic currency, using Coinbase instead of banks. Photographer: Michael Short/Bloomberg , Bloomberg

(Bloomberg) -- A selloff in crypto is dealing another blow to Coinbase Global Inc.’s junk bonds, which already rank among the worst-performing new issues of recent months.

The rocky trading since last week’s debut continued on Monday, with Coinbase’s longer-dated 2031 tranche that pays 3.625% interest falling to as low as 95.75 cents on the dollar, before retracing some of the lost ground. Volume is also high, implying that some accounts such as hedge funds are flipping the bonds, traders and investors told Bloomberg.

Coinbase’s notes may have been vulnerable because the offering left little wiggle room for adverse events, such as Monday’s cryptocurrency rout and the broader retreat in financial markets. The crypto brokerage and exchange company had already shaved off around 0.5% from the coupon during the marketing process, compared with early pricing discussions.

Meanwhile the U.S. Securities and Exchange Commission is upping the stakes in its spat with the entire crypto industry, and Coinbase in particular.

“In any given week, the reasons to love and hate crypto ebb and flow,” said Julie Chariell, a Bloomberg Intelligence analyst. “Last week was a flow week; this is shaping up to be an ebb week.”