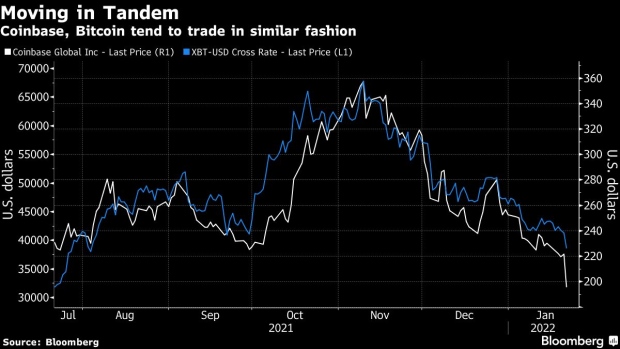 (Bloomberg) -- Shares of Coinbase Global Inc. have been hit hard amid a cryptocurrency selloff that has yet to show any signs of slowing.

The largest U.S. cryptocurrency trading platform fell as much as 15.7% on Friday, its biggest-ever single-session decline and one that’s pushed it to its lowest level since its April IPO. At the same time, Bitcoin lost as much as 8.7%.

The common shares of public companies that operate exchanges usually rise and fall with the popularity of the stuff that trades on them, and Coinbase’s moves have often matched nearly perfectly to that of Bitcoin. Meanwhile, Robinhood Markets Inc., a platform trading popular with retail traders, dropped nearly 7% during Friday’s session and has fallen to its lowest since its July 2021 public debut.

Right now, cryptocurrencies are trudging through a dark stretch, with Bitcoin, the largest digital asset by market value, losing roughly 40% since a peak reached in November. All of it’s happening as the Federal Reserve gets set to further withdraw stimulus from the market and as cryptocurrencies come under renewed regulatory scrutiny.

For Coinbase, it’s a function of this being the worst alt-coin market in the last year because that’s where a lot of the company’s growth was priced, according to Stephane Ouellette, chief executive and co-founder of institutional crypto platform FRNT Financial.

“Developments like DeFi and NFTs have stoked the growth expectations for COIN, which was otherwise a mature BTC-and-other-top-coin trading business,” he said. “So I think it does make sense that this would be trading worse than it has all year.”