Coinbase Global Inc.’s highly anticipated direct listing had touched off a frenzy in demand for all things crypto. A tumble shortly after its debut dented the euphoria.

Bitcoin pulled back from an all-time high after the biggest U.S. crypto exchange tumbled more than 15 per cent from its initial trading price. It opened at US$381 a share in its direct listing shortly before 1:30 p.m. in New York and spiked as high as US$429 in the first 10 minutes of trading before turning lower. It traded down 12 per cent at US$334 as of 3:30p.m. Bitcoin fell to its session low when Coinbase turned, and was down 2 per cent to US$62,000.

The listing is seen pushing crypto even more into the mainstream of investing, exposing legions of potential buyers to the digital asset class that have grown into a US$2 trillion industry in little more than a decade. Bitcoin, the original and biggest crypto coin, is valued at more than US$1 trillion alone after a more than 800 per cent surge in the past year.

Coinbase is valued at US$64 billion as expected, roughly the size of the parent company of the New York Stock Exchange. Given its size and visibility, Coinbase is likely to be popular with actively managed equity funds, particularly growth managers, essentially making a large swath of stock holders passive investors in crypto. 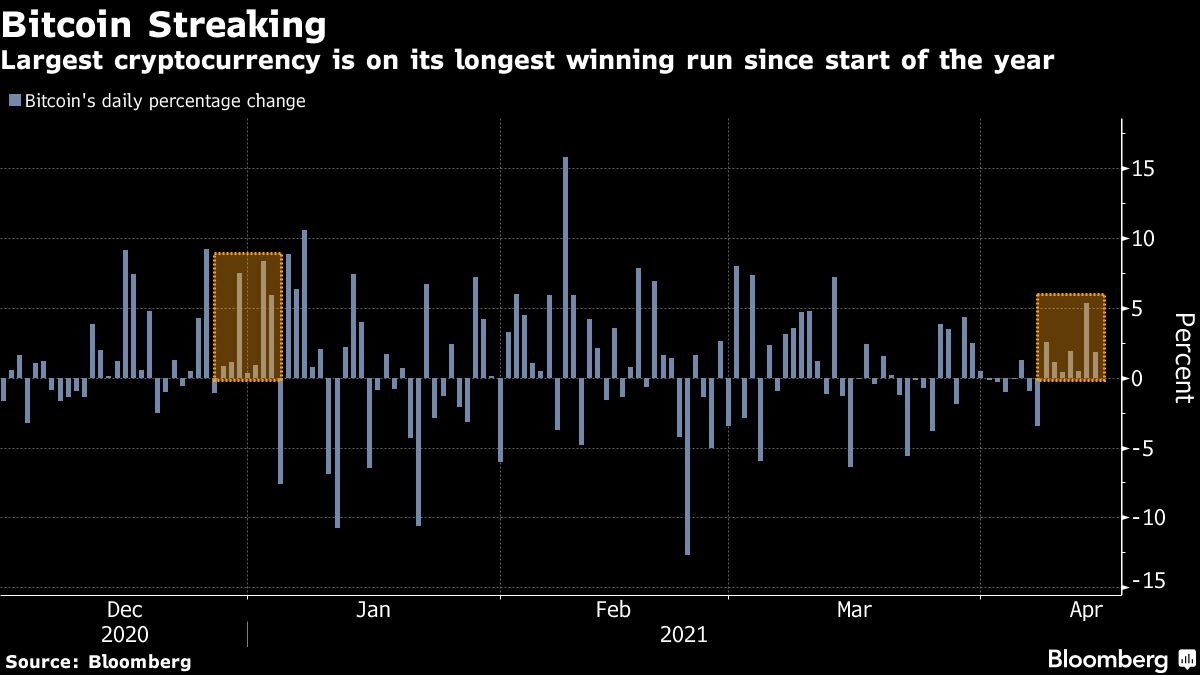 “It’s a huge step forward for the industry and the legitimacy it brings in the eyes of investors and regulators,” Mati Greenspan, founder of Quantum Economics, said on Bloomberg TV.

Growing mainstream acceptance of cryptocurrencies has spurred Bitcoin to a 120 per cent rally since December, as well as lifting other tokens to record highs. That’s despite lingering concerns over their volatility and usefulness as a method of payment. Attention from regulators is poised to intensify as Coinbase becomes a public company.

“As the direct listing on the Nasdaq will reach a wider investment base other than the usual crypto evangelists, investors must expect much greater government scrutiny,” said Nigel Green, CEO and founder of deVere Group.

The token was volatile during the morning, climbing as much as 2.7 per cent to US$64,869. It has risen for seven straight sessions, its longest winning streak since the start of the year.