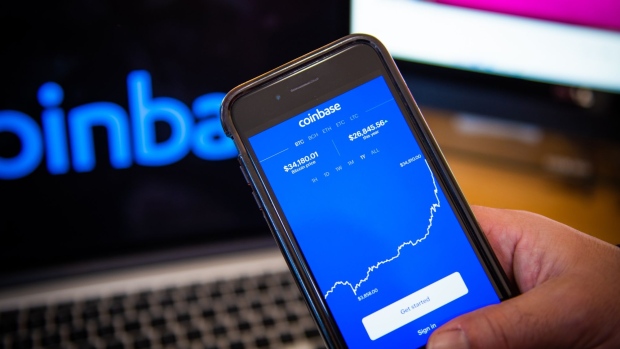 In a blog post on Friday, Coinbase sought to portray stablecoin USDC as a safer asset amid the turmoil unleashed by the collapse of crypto exchange FTX a month ago. USDC, which Coinbase co-founded together with Circle Internet Financial Plc in 2018, has seen its circulation drop by almost $10 billion since early September, data from CoinGecko show.

“Now more than ever, stability and trust are of the utmost importance to customers,” Coinbase said. “However, the events of the past few weeks have put some stablecoins to the test and we’ve seen a flight to safety.”

Coinbase had already waived fees for converting fiat currencies into USDC, and in July merged its order books for US dollars and the stablecoin. Circle, which oversees USDC, last month attributed the drop in circulation to a September move by Binance Holdings Ltd. to bolster its own stablecoin, called BUSD.

The implosion of Sam Bankman-Fried’s FTX in early November initially caused a rush to redeem Tether’s USDT, which has long been dogged by questions around the quality of assets backing it. But USDT’s circulation has bounced back slightly in the past two weeks and now stands at $65.7 billion, compared with $42.8 billion for USDC.

Both stablecoins are pegged 1-to-1 to the dollar, and claim to be backed by highly liquid assets like Treasury bills. A spokesperson for Tether said “we believe lower fees are always better for the customer” and described the Coinbase move as “wildly inappropriate.” USDT was trading at $1 on Friday, data compiled by Bloomberg show.

On Curve’s 3pool, a platform where users can swap between USDT, USDC and crypto-backed stablecoin DAI at par, USDT’s share stood at 30.1% on Friday, up from 27.4% on Dec. 5. USDC and DAI’s share of the pool both dipped slightly, meaning that on balance, traders have been swapping USDT for the two, albeit not at a dramatic pace.

Binance on Sept. 5 said it would implement a system which automatically converts USDC and most other stablecoins into BUSD at $1 on its exchange. USDT was left out of Binance’s change.

(Updates with comment from Tether spokesperson in sixth paragraph)