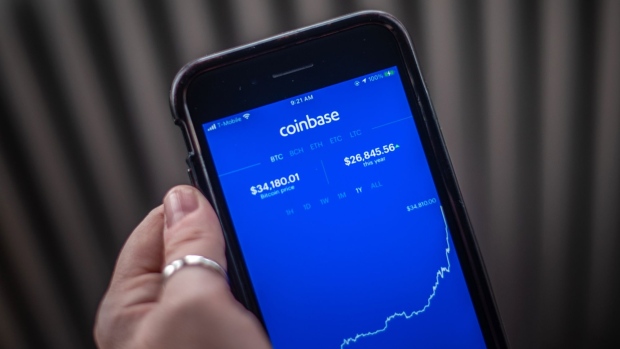 (Bloomberg) -- Coinbase Global Inc. said it’s being probed by the US Securities and Exchange Commission over its staking programs, which allow users to earn rewards for holding certain cryptocurrencies.

The company “has received investigative subpoenas and requests from the SEC for documents and information about certain customer programs, operations and existing and intended future products,” according to a quarterly regulatory filing. The requests relate to Coinbase’s staking programs, asset-listing process, classification of assets and stablecoin products, the company said.

Staking services are offered by many crypto exchanges as a key way to diversify revenue from trading, which tends to drop during market downturns. It allows users to generate yield on certain crypto holdings by delegating them to help verify transactions and secure the blockchain network.

At Coinbase, blockchain-rewards revenue, primarily from staking, accounted for 8.5% of net revenue in the second quarter. It fell 16% sequentially to $68.4 million during the quarter, less than the decline in trading revenue.

In a shareholder letter Tuesday, Coinbase said the SEC in May sent a voluntary request for information, including about its listings and listing process, and it doesn’t know yet if the inquiry will become a formal investigation. The crypto exchange is under scrutiny by the SEC for potentially making unregistered securities available for trading, Bloomberg previously reported.

“As with all regulators around the world, we are committed to productive discussion with the SEC about crypto assets and securities regulation,” Coinbase said in the letter.