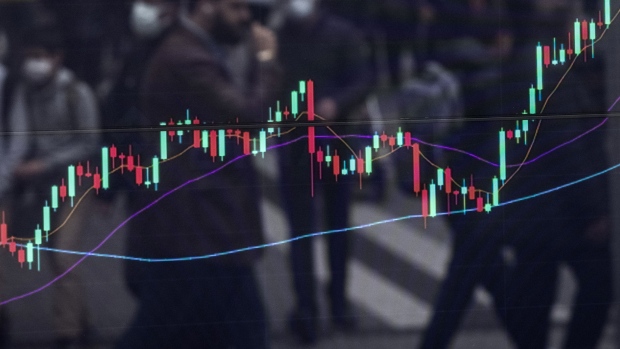 ISTANBUL, TURKEY - OCTOBER 19: People are reflected in screen showing a Bitcoin trading graph in the window of a cryptocurrency exchange office on October 19, 2021 in Istanbul, Turkey. The number of Bitcoin and cryptocurrency exchanges have increased across Istanbul as cryptocurrency investing continues to boom in Turkey. Many investors see cryptocurrency's growth as a shelter against inflation and the depreciating Lira. Turkey's Lira has lost 20% of it's value this year as Bitcoin approaches it's all time high on the back of today's historic debut of the first Bitcoin futures ETF on the NYSE. (Photo by Chris McGrath/Getty Images) , Photographer: Chris McGrath/Getty Images Europe

(Bloomberg) -- CoinList, a platform for new crypto offerings, has reached a valuation of $1.5 billion after a $100 million fundraising effort.

The round was co-led by Accomplice VC and Agman Partners, according to a statement, with investing participants including Fenbushi Capital, Continue Capital, Alphemy Capital, Matthew Rhodes-Kropf, Taavet+Sten and GoldenTree Asset Management.

“In this round, we focused on deepening relationships with our existing community rather than signing new venture capital,” said CoinList Chief Executive Officer Graham Jenkin. “While we have some great U.S. investors, our new investors are mostly VIPs and partners in the regions where we are growing fastest -- Asia, Europe and the Middle East.”

The firm has increased its user base more than 40-fold globally in the past year and has over 4.5 million users across more than 170 countries, according to the statement, with growth driven by a strong token issuance market as well as expansion into trading, staking and lending. CoinList increased monthly trading volume to $1 billion this year, and the number of average monthly traders increased eightfold, the statement said.