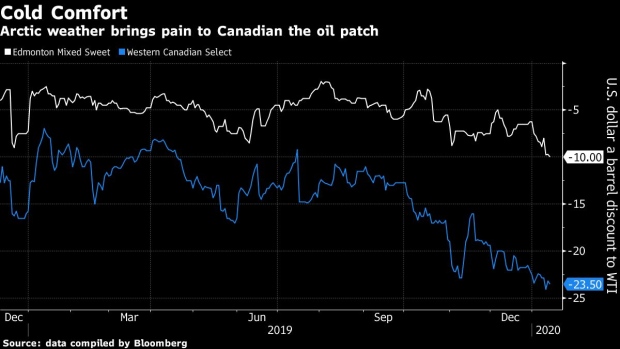 (Bloomberg) -- An arctic blast sweeping across Western Canada is weighing on the price of heavy crude.

Temperatures of -30 degrees Celsius (-22 Fahrenheit) and lower have descended on Alberta and Saskatchewan -- cold enough to render the region’s viscous oil rock solid. To transport it, producers must blend in more of a lighter crude called condensate, thereby reducing the volume that can be shipped by pipeline and increasing transportation costs, according to Kevin Birn, IHS Markit’s director of North American crude oil markets.

To be sure, oil is facing more headwinds than just the weather, Birn said. Inventories rose to a record in November after a pipeline shutdown and rail strike, according to Genscape. Stockpiles remain at “very high levels,” which means that even as pipeline takeaway and rail capacity increases, there are few “shock absorbers” to deal with sudden disruptions.

To contact the reporter on this story: Robert Tuttle in Calgary at rtuttle@bloomberg.net

To contact the editors responsible for this story: David Marino at dmarino4@bloomberg.net, Catherine Traywick, Ben Sharples