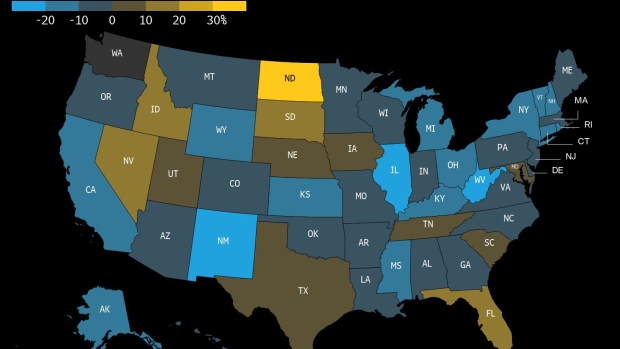 (Bloomberg) -- The pandemic accelerated a trend that college deans and finance chiefs throughout the U.S. Midwest have been dreading: There are fewer 18-year-olds to fill classrooms, dorms and dining halls.

That means less revenue, increasing the likelihood of budget cuts affecting staff, the curriculum and sports programs, while schools are forced to offer bigger financial incentives to attract students.

Tumbling birth rates across the region will also become a bigger problem for many mid-size public colleges, compounding the devastation wrought by Covid-19.

“We can see in our K-12 system what’s coming,” said Sean Broghammer, interim vice president for enrollment management at Kent State University, which draws about 80% of its students from Ohio.

The damage is mounting.

Even as most undergraduates returned to campuses for in-person classes in August and September, schools such as Southern Illinois and Indiana State University in Terre Haute have fewer students this fall than the previous one.

The main campus at Kent, located in the Northeast Ohio city of the same name, reported a 1% enrollment decline, while headcount across its eight-campus system has dropped 4%, or 1,500 students.

Kent State said in June that it would offer more aid for tuition and fees to lower-income students from Ohio studying at the main campus, after other scholarships are depleted. About 20% of the freshmen class qualified, costing the university about $5 million annually, Broghammer said. That figure may change depending on how many students qualify each year.

“We’re all recruiting from that same pool, and the pool is declining,” he said.

Last fall, enrollments in the Midwest slid 4.7%, almost double the drop for the entire U.S., according to the National Student Clearinghouse Research Center.  While the pandemic was the primary reason for the 2020 declines, falling birth rates are expected to be the main culprit going forward. Births tumbled 17% nationally from 2007 through 2020, according to Nathan Grawe, an economics professor at Carleton College who studies demographic trends. Based on that and other data, he projects undergraduate enrollment declines will accelerate around the middle of this decade, especially in the Midwest and Northeast.

The shrinking number of students is on “everybody’s mind,” said Sara Appel, associate director of policy initiatives at Midwestern Higher Education Compact, a Minneapolis-based nonprofit that seeks to attract students to colleges in the region.

Some private schools are weathering the crisis, and financial incentives appear to be helping.

At the College of Wooster, about 35 miles southwest of Akron, the total number of students rose by 36, or 2%, after the school offered a minimum scholarship of $27,500 a year for Ohio residents, said Jenn Winge, vice president for enrollment. The school draws about one-third of its students from the Buckeye State.

Even small swings in enrollment can have a big impact on a college’s finances.

“For schools of our size and scope, a difference of 10 can make a difference in how you build your budget and how things look and balance at the end,” Winge said.