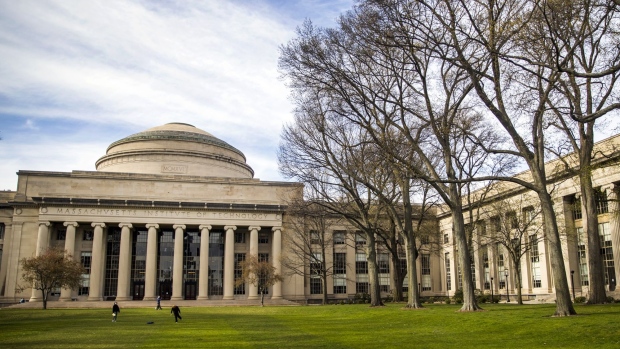 People stand on the lawn outside Building 10 on the Massachusetts Institute of Technology (MIT) campus in Cambridge, Massachusetts, U.S., on Monday, April 20, 2020. College financial aid offices are bracing for a spike in appeals from students finding that the aid packages they were offered for next year are no longer enough after the coronavirus pandemic cost their parents jobs or income. , Bloomberg

(Bloomberg) -- In the world of executive search, there are few tasks more herculean than hiring a university president, with the number of people seeking a say in the decision -- administrators, faculty and wealthy alumni among them -- seemingly endless.

In the past year, sitting presidents at some of the top colleges in the US have announced they’re stepping down, triggering the arduous process of finding their replacements -- and making the job even tougher than usual, with competition fierce for the most-desirable candidates.

Harvard University, the Massachusetts Institute of Technology and Columbia University are all looking for new leaders. Until last month, Dartmouth College was on the hunt as well. The pandemic led some presidents to delay their retirements, and spurred others to step down after enduring the toughest two years of their tenures, leaving a wave of schools to seek new leadership.

“We started looking at presidential turnover five years ago because it was clear that there was a demographic tsunami coming,” said Michele Haertel, a consultant for executive-search firm Spencer Stuart who has advised schools on their presidents for 16 years. “Some presidents, out of loyalty and care for their institution, postponed their retirement during Covid.”

Leadership turnover among top universities has coincided before. A decade ago, Princeton University, Yale University and Dartmouth were all searching for new presidents at the same time. But Covid-19 -- the crush of work dealing with the crisis at its outset that delayed departures, then the stress as the pandemic dragged on -- has spurred a cluster of retirements all at once, instead of announcements being spread out, said Richard Levin, who served as Yale’s president for two decades before his 2013 retirement.

Even with the extreme circumstances of the past couple years, the job description hasn’t changed: College presidents need to be analytically strong, have a strong vision and must demonstrate to various constituencies -- professors, students and alumni -- that their myriad opinions are listened to and considered.

“It was always a complex job managerially,” Levin said. “Covid added a layer of complication. It was unprecedented.”

While searching for the leader of a large institution is always challenging, there are additional challenges in academia: A litany of powerful and vocal stakeholders all have a say in choosing the candidate, usually taking the form of a “presidential search committee.”

Such committees often include university trustees, faculty and alumni. At the richest colleges, they can look like a Wall Street who’s who. Harvard said last month that Carlyle Group co-founder David Rubenstein would be on the university’s presidential search team, while Jonathan Lavine, co-managing partner of Bain Capital, will take part in Columbia’s hunt. Steve Cahillane, chief executive officer of Kellogg Co., helped out with Northwestern University’s recruitment.

The average amount of time college presidents spend in office has been on the decline. From 2006 to 2016, for instance, that figure fell to six and a half years from eight and a half, according to a survey conducted every five years by the American Council on Education, which is slated to release a new report next spring. At the same time, the average age of presidents has been climbing, increasing by a decade since 1986.

“We would not be surprised if the trend continues,” said Hironao Okahana, assistant vice president of research at the council. “Given some of the recent departures and new arrivals that we know of, we anticipate that we will see more presidents relatively new to their current posts.”

As the richest schools scour the academic landscape for leaders -- and start to pluck them from other colleges -- something akin to a game of musical chairs ensues.

“If large, complex, top-tier institutions are looking, there’s a daisy chain impact to the industry,” Haertel said. If you pull a provost from one institution for another, that creates a provost opportunity at the original school.

The same goes for presidents. Dartmouth hired Barnard College’s president in late July, and Northwestern named the University of Oregon’s president to its top job just last week. Both schools that were poached from will be forced to look for new leaders as well.

“These are very intense and time-consuming searches -- you really have to curate what you do and be sure that you have the time, the resources and the attention to give to these schools,” said Haertel, whose firm worked with Dartmouth on its search, according to the school’s website.

Andrew Hamilton -- who was Yale’s provost under Levin before serving as vice chancellor of the University of Oxford, then becoming president of New York University -- said he’s stepping down from that role in June 2023. After a sabbatical, he will return as a professor in the chemistry department. Navigating the school through a pandemic seemed to play no small part in that decision.

“The challenges presented by Covid-19,” he said in April when he announced his retirement, “were the most difficult I have seen in my 40-year career in higher education.”