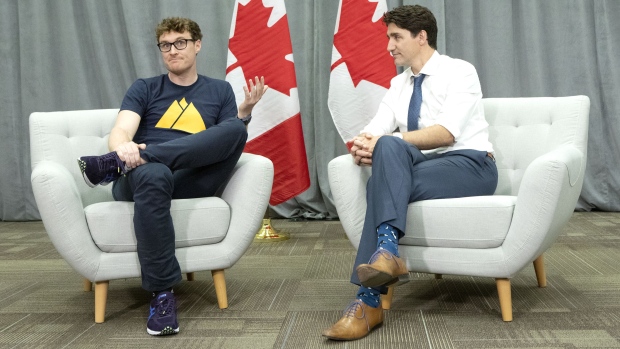 Prime Minister Justin Trudeau, right, meets with co-founder and CEO of the Collision tech conference, Paddy Cosgrave, in Toronto on Monday, May 20, 2019. When Cosgrave welcomed the world to his annual Collision tech conference on Tuesday morning, it was far from the event he envisioned when he started planning it last year. Gone was the bustling Enercare Centre floor in Toronto, where start-ups, investors and company head honchos rubbed shoulders last year. The handful of massive stages where celebrities and executives held court weren't there either. The Canadian Press /Chris Young

TORONTO -- When Paddy Cosgrave welcomed the world to his annual Collision tech conference on Tuesday, it was far from the event he envisioned when he started planning it last year.

Gone was the bustling Enercare Centre floor in Toronto, where startups, investors and company head honchos rubbed shoulders last year. The handful of massive stages where celebrities and executives held court weren't there either.

Instead, Cosgrave offered his opening salutations from the guest bedroom of his home in Ireland, where he had been plotting the conference's shift to a virtual model since COVID-19 disrupted his plans in March.

"There was an incredible buzz. It's just very different," Cosgrave, an affable Irish entrepreneur who runs the famed Web Summit, Collision, Rise and F.ounders conferences, told The Canadian Press on Thursday.

"In an online format, you can just see the scale of interaction. It's kind of crazy to have people on the platform from India, Japan and China at 1 a.m. this morning because they were getting up and already messaging people."

The conference offered one of the world's first peeks at the future of major tech conferences, which have had to grapple with travel restrictions, closures and financial anxieties amid COVID-19.

Over the three days Collision ran this week, it brought talks spanning nearly every industry to 32,000 people — 45.2 per cent of them women  — spread out across 140 countries.

They heard from the director general of the World Health Organization, officials representing Uber, Netflix, Sidewalk Labs and PayPal and were even joined by speakers including Paris Hilton, Shaquille O'Neal and Lucy Liu.

Prime Minister Justin Trudeau was due to join the mix late Thursday before Collision wrapped.

For Cosgrave, the decision to take five-year-old Collision virtual wasn't easy, but was necessary given how fast COVID-19 started sweeping the globe.

"Our decision was maybe a little ahead than most," he said of the announcement he made on March 6.

People were stunned and social media was lighting up with exasperation, Cosgrave recalled, because mass shutdowns of major cities and the events that draw people there had yet to take place.

In Canada, Shopify's annual Unite conference was the only major tech event to beat Collision to a digital shift.

Collision got a video conferencing platform ready in months. It had a few hiccups and lacked some of the bells and whistles Cosgrave had hoped for, but the event went on.

The tough part was persuading speakers to get involved, he said.

"We were running up against the fact that a lot of companies, a lot of speakers and a lot of attendees were beginning to have a lacklustre experience because most online conferences were a glorified Zoom call," he said.

Razor Suleman, the co-founder of rival tech conference Elevate, was watching the event intently in hopes of getting some insight into how his Toronto-based gathering held annually in September could go on.

Suleman wouldn't say what form Elevate will take, but he teased more details are coming in July and the conference won't be centred around spending days online in front of a screen because he is dedicated to getting people out and moving.

"The guys running Collision are very entrepreneurial, and so I applaud them because when others may have cancelled they quickly pivoted to Collision at Home," he said.

"But based on my own experience, the conversations I've had and the data that are coming from our survey, I think that it is clear that the experiment was not successful. They made money, but in terms of the user experience, I don't think the magic of an event... can be replicated online."

Suleman, who helped bring Collision to Canada, took issue with some of the content being pre-recorded and said the conference had the misfortune of being held at a time where many people are growing fatigued at the thought of logging onto video platforms.

While Collision, which jumps to a new city every few years, was due to call Toronto home from 2019 to 2021, Cosgrave said COVID-19 means Toronto is getting a bonus year.

He hopes it will be in-person because the virus will have subsided, but believes the future of conferences is "hybrid."

"(With) Shopify, for example, I have no doubt at a certain point that they will restart their in-person conferences, but then also have a strong emphasis on people joining them virtually from around the world, and that will be the same for us," he said.

"Whether it is Microsoft or Google or the Consumer Electronics Show, that will be the future."