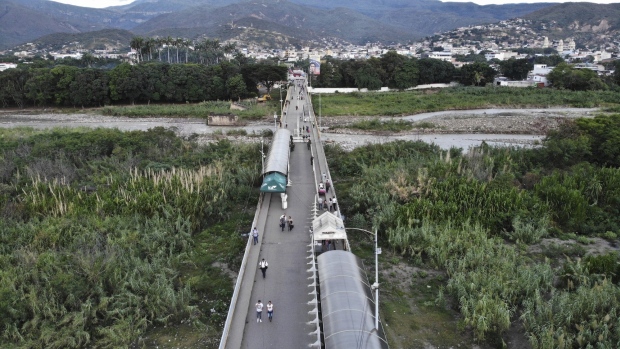 Pedestrians cross the Simon Bolivar International Bridge as it reopens near the Colombian border in Tachira, Venezuela, on Sunday, Aug. 7, 2022. , Bloomberg

(Bloomberg) -- Colombia and Venezuela fully re-opened their border on Monday, potentially reactivating billions of dollars in trade that dried up during years of diplomatic tension.

The first truck crossed a bridge near the Colombian city of Cucuta in the morning, transporting Venezuelan metal exports, as the flow of vehicles re-started.

“Today means the legalization of people and trade flows,” Colombia’s newly elected leftist President Gustavo Petro said in a speech at the border. “These two economies need to reintegrate.”

The first direct flight in more than two years is scheduled to take off this week.

Petro moved to normalize relations with his Venezuelan counterpart, Nicolas Maduro since taking office last month, marking a shift in foreign policy for Colombia, which had joined the US and dozens of other countries in 2019 in a bid to isolate the Maduro government.

Venezuela used to be Colombia’s most important export market after the US. But bilateral trade slumped as relations soured. Last year, Colombia exported about $330 million of goods to Venezuela, down from more than $6 billion in 2008.

Pedestrians have been allowed to cross the border since last year, but the main bridges across the border have been blocked since 2019, when former Colombian President Ivan Duque recognized a Venezuelan opposition leader as head of state, prompting Maduro to sever diplomatic relations.

Those relations restarted this month when the countries exchanged ambassadors.

Even with the formal border points shut, smugglers and civilians had no difficulty crossing the border in both directions along dirt tracks controlled by guerrillas and mafia organizations.

Maduro slowed plans of what was expected to be an immediate reopening over concern that a flood of imports from Colombia would hurt Venezuelan producers.

As relations improve, some members of Maduro’s government had hoped that Petro would extradite Venezuelan opposition leaders in exile there. However, Petro appeared to scotch that idea, saying that Colombia guarantees the right to political asylum.