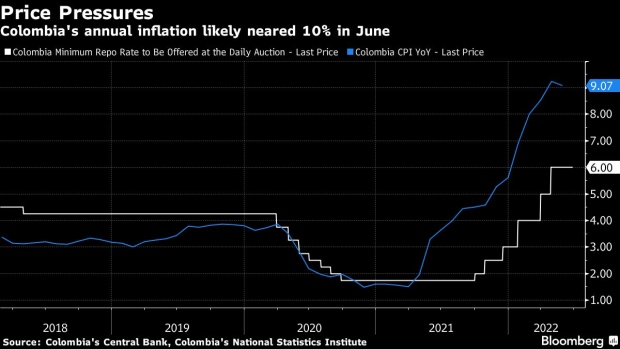 The Central Bank of Colombia building in Bogota, Colombia, on Monday, Feb. 7, 2022. Colombian consumer prices jumped far more than expected last month, its highest level since 2017, increasing pressure on the central bank to raise interest rates further and faster to bring it back under control. Photographer: Nathalia Angarita/Bloomberg , Bloomberg

Colombia’s central bank is set to speed up its pace of interest rate increases, as policy makers look past President-elect Gustavo Petro’s criticism of tight monetary conditions and focus on surging inflation.

The bank will lift rates by 150 basis points to 7.5% Thursday, the steepest hike since it adopted an inflation targeting regime in 1999, according to 13 of 22 economists in a Bloomberg survey. One sees a lift of 75 basis points, while six project a 100-basis-point rise and two see a boost of 1.25 percentage points.

Traders in the interest-rate swaps market expect a smaller increase, to 7.25%.

Policy makers are acting aggressively to tame inflation that’s rocketing toward 10%. That’s put the institution on a collision course with Petro, who has warned that higher rates will hurt activity and employment. While the bank is autonomous, some investors believe it could opt for more gradual hikes amid the president-elect’s remarks and also prospects of a global downturn.

“We expect the central bank to increase its benchmark rate by 150 bps to 7.5% on June 30 -- a bigger move is possible though -- and keep the door open for further tightening. Accelerating inflation, rising inflation expectations, and strong domestic demand support the decision.”

The decision will be announced by Governor Leonardo Villar at a press conference starting at 1 p.m. in Bogota. Here’s what investors will be looking out for:

Investors are eager for central bank insight on how much higher rates will rise given prospects of the fastest economic growth in Latin America and also higher inflation, said Banco de Bogota chief economist Camilo Perez.

Annual inflation slowed to 9.07% in May, driven by easing food prices, but economists expect a rebound this month to 9.74%. The strength of the economy has already closed the output gap and will likely generate new price pressures.

On the other hand, raw material costs may fall if a global economic slowdown materializes, thus providing some consumer price relief.

The latest central bank survey shows year-end inflation forecasts at 8.62% and the key rate at 8.5%. Policy makers target cost of living increases of 3%.

Given this is the first monetary policy decision since Petro’s runoff victory earlier in June, investors will be on the look-out to see if policy makers comment about the new administration, according to Banco de Bogota’s Perez.

Petro caused controversy during the campaign when he said productive sectors of the economy should have seats on the bank’s board. He also said policy makers should not only target inflation but also guarantee economic growth and fight inequality.

While it’s not unusual that Colombian heads of state criticize the central bank for boosting its rates -- Petro’s predecessor Ivan Duque did it a few times himself -- investors will be carefully watching the president-elect’s choice of words for hints about his future relationship with the independent monetary authority.