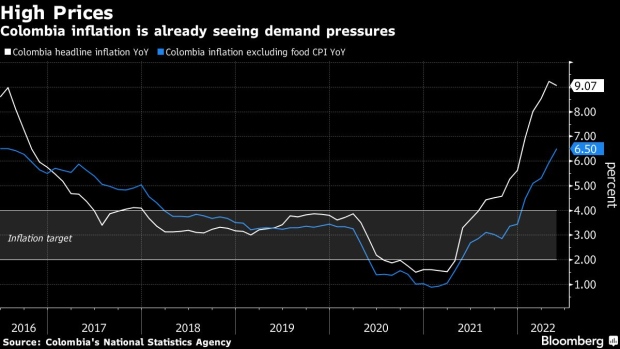 Colombia’s central bank delivered its biggest interest rate increase in over two decades, potentially putting itself on a collision course with President-elect Gustavo Petro, though it signaled the pace may not be kept in future decisions.

The board unanimously raised rates by 150 basis points to 7.5%, Governor Leonardo Villar told reporters after a policy meeting Thursday. That’s the largest hike since the bank implemented its inflation-targeting strategy in 1999.

The decision was correctly forecast by 15 of 24 economists in a Bloomberg survey, including those from JPMorgan Chase & Co and Credit Suisse Group AG. Barclays Plc and five other forecasters saw a full percentage point hike, while two expected a boost of 125 basis points, and one an increase of 75 basis points.

Policy makers won’t necessarily raise borrowing costs by the same amount going forward, Finance Minister Jose Manuel Restrepo, who sits on the bank’s board, told reporters after the decision. In an accompanying statement, board members wrote that the pace of monetary policy adjustments will depend on available information.

This is the first rate decision since Petro won the presidency earlier this month. The peso has sold off since the June 19 vote, making imports even pricier, while financial markets remained concerned about the leftist leader’s plans to end new oil exploration and overhaul pensions.

Colombian policy makers are bracing for another spike in annual inflation that’s already above 9%. Cost of living increases have been propelled by higher raw material prices and strong activity. Fuel will become more expensive in coming months as the government phases out subsidies.

“Policy makers anticipated more hikes and emphasized the number and magnitude will depend on new information. While another 150-bp hike at the July meeting can’t be ruled out, policy makers made an effort in the post-meeting press conference to limit expectations, suggesting the bar is high and they may prefer to return to smaller hikes.”

Policy makers across Latin America are being compelled to extend their monetary tightening campaigns as the US Federal Reserve starts its own cycle of interest rate increases. With today’s decision, Colombia has increased borrowing costs by 575 basis points since September -- more than Mexico and Peru though much less than Chile and Brazil.

During the presidential campaign, Petro criticized interest rate increases, saying they will hurt economic growth and the labor market. He worried investors by saying some sectors of the economy should have seats on the bank’s board, and that policy makers should also look to fight inequality.

Yet this week Petro named renowned economist Jose Antonio Ocampo as finance minister, in a signal he is moving to calm investors. Ocampo, 69, will also have a seat on the bank’s board after resigning in January 2020 when he was a co-director at the institution.

In the press conference following the rate decision, Villar told reporters that Ocampo had been his professor. When asked what message he would like to send the upcoming finance minister, he said it’s urgent to bring inflation back down to target.

“To bring inflation to 3%, hopefully faster than what is reflected today in analysts’ and the markets’ expectations, it is not enough to adjust toward levels considered neutral,” Villar said. “But rather, it might be necessary to move toward a situation where monetary policy is contractionary.”

Colombia’s central bank doesn’t provide forward guidance about how far the tightening cycle will go, as it can send wrong messages to investors and conditions are changing rapidly, Villar added.

Colombia’s annual inflation eased to 9.07% in May, but it’s still way above the central bank’s target of 3%. Consumer prices likely rebounded to 9.74% this month, according to economists in a Bloomberg survey.

The International Monetary Fund sees Colombia’s gross domestic product expanding 5.8% this year, more than any other major Latin American economy. The nation’s current account deficit is one of the largest in emerging markets.

(Updates with quotes from Villar starting in paragraph 11)