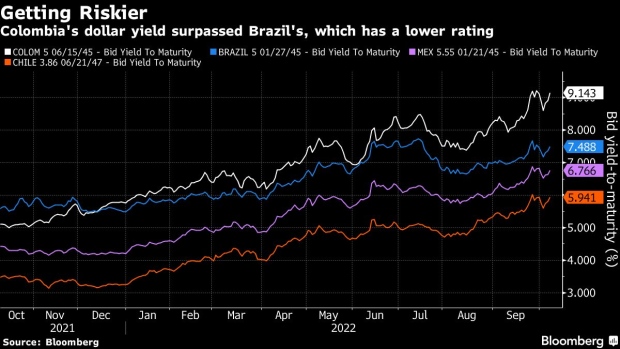 The city skyline of Bogota, Colombia, on Sunday, July 3, 2022. Dozens of Venezuelan opposition figures, who turned Colombia into their unofficial headquarters in recent years, say the election of Gustavo Petro as Colombia's first leftist president puts them at risk, and they plan to leave. Photographer: Nathalia Angarita/Bloomberg , Bloomberg

The yield on the nation’s dollar-denominated notes due 2045 jumped 23 basis points to 9.1% on Friday as prices fell to 60.7 cents on the dollar, near the record low reached a week ago. The nation’s five-year credit default swap spread rose 16 basis points to 332 -- that’s about 35 basis points above the cost of insuring debt from Brazil, which is rated two notches below Colombia.

Investors are dumping Colombia’s local and foreign bonds, as well as the currency, since President Gustavo Petro weighed on a “transitory tax on hot money flows.” Ocampo tried to reassure markets late Thursday, saying that the government is not going to propose capital controls nor is it going to impose taxes on capital outflows, but that did little to lift markets.

“Petro’s comments are creating unnecessary noise and uncertainties, and that makes investors uneasy,” said William Snead, a strategist at BBVA in New York. “Bonds are definitely cheap at current levels but there needs to be some reassurance.”

Colombia’s credit director Jose Roberto Acosta had already attempted to calm the jittery market on Thursday, saying that capital controls are “neither necessary nor useful.” Still, the yield spread on the country’s dollar bonds due 2045 over equivalent US Treasuries widened about 40 basis points to almost 500 points since Petro’s comments.

Investors have long been wary of Petro’s policies as the president has already spooked markets pledging to end new oil exploration. Since being elected in June, the Colombian currency has lost more than 15%, the worst performance in emerging markets after the Argentine peso.

“While we do not think capital controls will be imposed, the fact Petro is suggesting controls leads us to believe that political risk and the implementation of a less technocratic policy agenda is still a risk hovering over the peso,” Wells Fargo analyst Brendan McKenna wrote in a note on Friday.