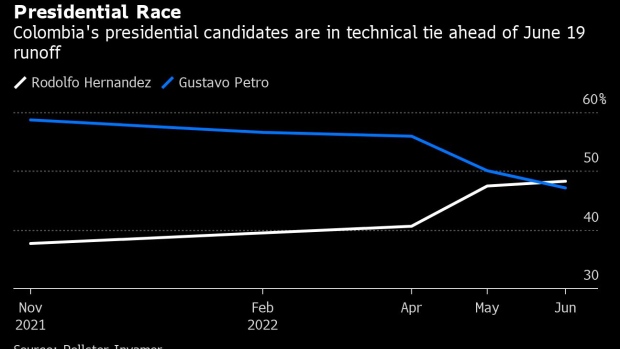 (Bloomberg) -- Colombia’s presidential race is too close to call according to a new poll, nine days ahead of a runoff between a construction magnate and a leftist senator.

Rodolfo Hernandez, who surprised by making it to this month’s second round has 48.2% of voter intention, compared to 47.2% for Gustavo Petro, according to a survey from Invamer commissioned by Blu Radio, Noticias Caracol and El Espectador.

The gap between the two candidates is less than the margin of error of 2.69%, meaning they are technically tied. The poll of 2,000 people was conducted between June 3 and 7.

In a sign of how Colombians are rejecting the establishment and are tired of conservative governments that have run the country in the past decades, voters will choose between the previously little-known 77-year old independent Hernandez who is pledging to cut government waste and corruption, and Petro, 62, who wants to tax the wealthy and halt oil exploration.

Hernandez, the former mayor of the city of Bucaramanga has greater backing between rural voters while Petro is stronger among younger voters, the Invamer poll shows.

Hernandez on Thursday said he was halting public events until the election, citing security concerns. He also said that after the government guaranteed his safety, he will return to the country on Saturday, after having traveled to Miami as part of his campaign.