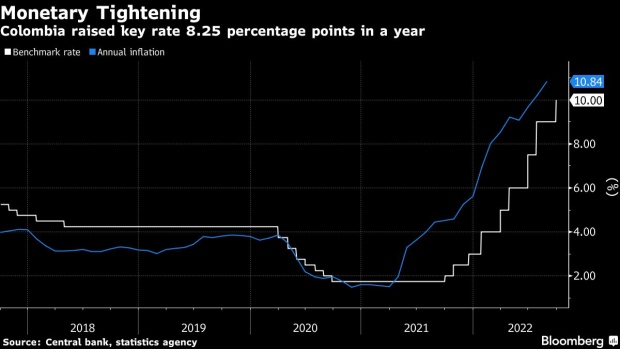 Shoppers at a food market in Riohacha, Colombia, on Saturday, Aug. 13, 2022. Soaring prices of food and fuel across Latin America are hitting the poor the hardest, creating a political tinderbox that's a warning to the world. , Bloomberg

(Bloomberg) -- Colombia’s peso weakened and swap rates tumbled after the central bank delivered a smaller-than-expected interest-rate increase, even as consumer prices rise at the fastest pace in 23 years.

The peso was the third-worst in the world on Friday out of more than 140 currencies tracked by Bloomberg, posting a drop of as much as 1.2% to 4,583 per US dollar, while two-year swap rates fell 32 basis points, the biggest drop since July.

The central bank increased the benchmark rate on Thursday to 10%, with six board members voting for the move, while one argued for a smaller hike of half a percentage point.

“This will continue to fuel pressure on the peso,” Daniel Rico, a strategist with RBC Capital Markets in New York, said in a message. “They sent a message that will deteriorate inflation expectations, especially when you consider the impact of higher gas prices, talks over the minimum wage and the effect indexation will have in 2023.”

Morgan Stanley strategists Ioana Zamfir and Lucas B Almeida recommended clients bet against the Colombian peso targeting a currency drop to 4,755 per US dollar.

“Over the next few months, there are signs of a deceleration in productive activity,” the bank said in its statement. “The fears of a global recession have increased, causing reductions in commodities prices.”

Policy makers cut their forecast for economic expansion next year to 0.7% from a previous estimate of 1.1%.

Julian Cardenas, an analyst at pension fund manager Proteccion SA, said the slower pace of monetary tightening sends the signal that policy makers are nearing the end of the hiking cycle.

That cycle has seen the steepest series of interest rate increases in Colombia’s history, beginning a year ago when the key rate was 1.75%. The economy is forecast to grow at the fastest pace among major Latin American economies this year, led by strong domestic demand, before slowing sharply next year. The bank raised its outlook for 2022 expansion to 7.8% from 6.9%.

Elsewhere in the region, Mexico raised its policy rate three quarters of a percentage point to 9.25% on Thursday. Brazil’s central bank brought an 18-month series of rate increases to an end this month, while Chile’s central bank said that interest rates may have to move significantly higher.

Colombian inflation accelerated to 10.8% in August, led by a 26% jump in food prices. Economists surveyed by the central bank expect it to end the year at 11.3%, more than triple the 3% mid-point of the bank’s target range.

Colombian policymakers are also bracing for an increase in fuel prices as the government of President Gustavo Petro starts to phase out gasoline subsidies from next month. Petro is also expected to push through a large increase in the minimum wage, which would take effect from January.

It was the first monetary policy meeting of Finance Minister Jose Antonio Ocampo, who took office alongside Petro last month.