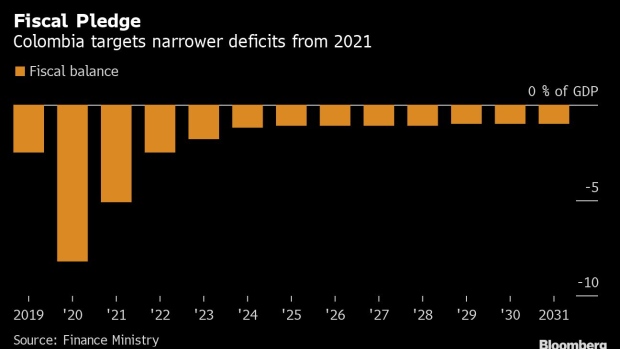 This cautious approach also improves the chances of the nation getting a more favorable exchange rate, Zarate said in a video interview on Thursday.

Colombia will be the first country to tap an IMF flexible credit line, a pre-approved source of funding that comes with no conditions on how it’s spent.

The government says it will use the money to finance its response to the pandemic. Colombia is suffering the deepest slump in its history this year, with thousands of bankruptcies and more than three million jobs lost.

The Finance Ministry forecasts the economy will contract 5.5% this year. That would be the worst performance in more than a century, but has still been criticized by Fitch Ratings and others as overly optimistic.

Zarate said the ministry is currently revising its outlook, as well as its projection of a 6.6% rebound next year. The peso has weakened 15% this year, a bigger drop than Andean peers Peru and Chile.

After the pandemic hit, the country suspended its “fiscal rule” or balanced-budget act, for the next two years. But even as the government ramps up spending to try to soften the crash, it’s anxious to keep borrowing at manageable levels and protect its credit rating, Zarate said.

“A shock like this implies higher spending, but we shouldn’t heed siren songs that deficits pay for themselves, or that we don’t need to think about long-term sustainability,” Zarate said. “I hope we’ll be on the path to radically better fiscal balances from 2022.”

Colombia is rated at the second-lowest level of investment grade by Moody’s Investors Service, while S&P Global Ratings and Fitch Ratings have the country one notch above junk.

The finance ministry is targeting a fiscal deficit at 8.2% of gross domestic product this year, narrowing to 5.1% in 2021. The government will begin the work of deficit reduction next year, Zarate said.

To fund next year’s budget, the government plans to sell assets that may include stakes in oil producer Ecopetrol SA, energy operator Interconexion Electrica SA, and regional electricity generating companies.

The government is confident it can raise funds equivalent to more than 1% of GDP via such sales, but hasn’t yet decided which asset it will offer, Zarate said.