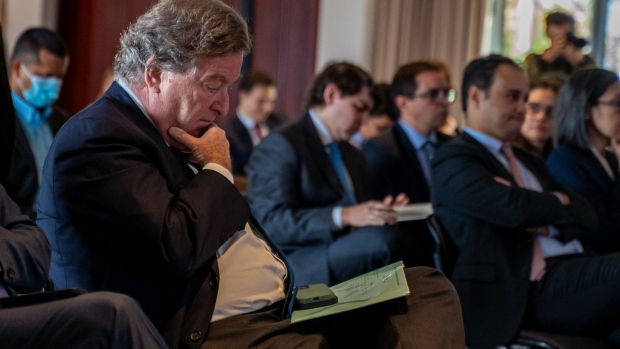 (Bloomberg) -- Colombian billionaire Jaime Gilinski scrapped his push to buy a stake in Grupo Argos SA as he focuses on other ways to take control of the country’s most influential business group.

The banker’s effort to buy at least 26% of the cement and infrastructure conglomerate fell short when the stock exchange said Wednesday that shareholders tendered just 11% of the total. Gilinski won’t buy the shares that were offered and doesn’t plan to make a new bid for now, according to a person familiar with the decision who asked not to be identified discussing the plan.

Since November, Gilinski has been trying to win control of an alliance of Medellin-based businesses known as the Grupo Empresarial Antioqueno, or GEA. Grupo Argos, along with Grupo Nutresa SA and Grupo de Inversiones Suramericana SA, or Grupo Sura, are part of the GEA, which uses a strategy of cross investments to defend itself against the very type of takeover attempts that Gilinski is making.

While acquiring the stake in Argos wouldn’t have given him control of the GEA, making the tender offer helped prompt several members of the board who were part of GEA top management to step aside, according to another person familiar with the strategy who also asked not to be identified. That may make it easier to push through any future attempt to take control of the company, the person said.

Gilinski has spent more than $2 billion buying up stakes in Sura and Nutresa. He now owns a 31% stake in Nutresa, which makes him the food producer’s second-largest shareholder, and he is also the largest shareholder in Grupo Sura, with 38%, following three tender offers and additional purchases in the secondary market.

In order to take control of the GEA, Gilinski needs to increase his stake either in Grupo Sura by another 12% of outstanding shares or in Nutresa by an additional 20%, according to the second person.

Gilinski will seek to increase his stake in either Sura or Nutresa by beginning new tender offers or making direct offers to the companies, the person said.

“He’s not going to stay put after throwing $2.5 billion in the pot,” BTG Pactual analyst Daniel Guardiola said in a phone interview. “Once he gets control of one of the three holding companies, he’ll get control of all of GEA. The entire system will collapse like a pack of cards.”

Grupo Argos shares will likely fall Thursday once the market reopens, Guardiola said. The shares have risen more than 5% since Gilinski launched the bid for the company.