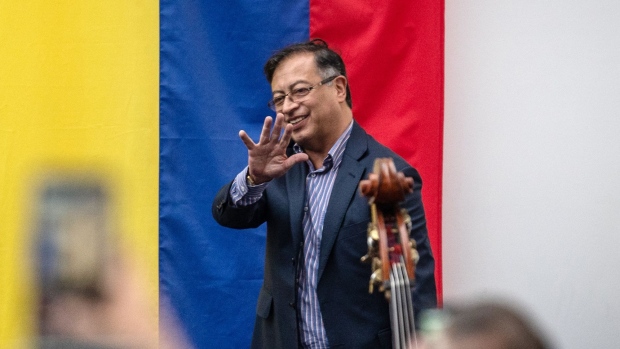 (Bloomberg) -- Colombia President-elect Gustavo Petro has secured an alliance with the powerful Conservative Party, putting him closer to finding a majority in Congress.

Lawmakers from the Conservative Party said in a letter that they will not serve as an opposition party to Petro’s left-wing coalition and will support his political agenda. The party preliminarily has 16 of 108 seats in the senate and 25 of 188 seats in the lower house, as electoral authorities haven’t yet certified the March Congressional vote.

Colombia’s U Party has also said it will not declare itself an opposition party and is studying whether to be independent or part of the government coalition.

The decision by the Conservatives to back Petro wasn’t unanimous and caused a crisis in the party, with its leader, Omar Yepes, announcing his resignation.

Petro will be sworn in Aug. 7. Political movements have to decide by Sept. 7 whether they’ll be opposition, independent parties or part of the government.

Last week, Petro formed another alliance with the Liberal Party, and now, he may have enough seats to approve laws.

Some investors fear the leftist leader could push reforms like tax increases aimed at the country’s richest, a reform of taxes on land ownership, and the overhaul of the pension system.

Outgoing President Ivan Duque’s Democratic Center Party said it will be an opposition bloc to Petro.