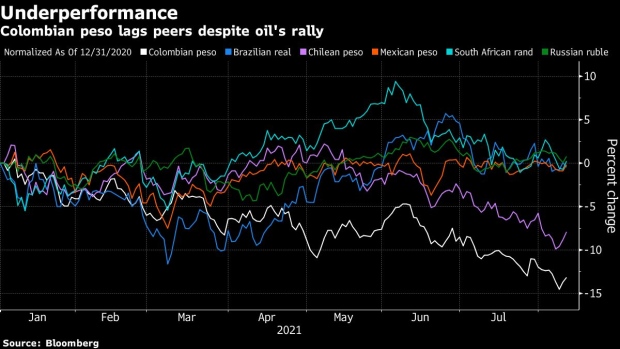 (Bloomberg) -- Colombia’s central bank has its work cut out for it if officials want to put a floor under one of the world’s worst-performing currencies this year.

The Colombian peso offers substantially less carry to investors than the currencies of major neighbors like Brazil, especially once volatility is taken into account. While the central bank has made more hawkish noises of late, suggesting that interest-rate hikes are on the way, that might prove too little, too late for some, leaving the currency at risk of continuing to underperform.

With monetary officials across the region from Santiago to Brasilia already tightening, the Colombian currency’s fate may rest with how convincing investors find the Banco de la Republica’s shift away from easy policy and how far they think rate increases might go. Meanwhile, the potential return of political volatility -- which spiked earlier with protests against tax changes and credit rating downgrades -- also presents a risk, as does any shift in direction by the U.S. Federal Reserve toward tighter policy.

“We had two downgrades. It’s a huge shock for markets. There was a repricing. It decoupled from oil. Then the fiscal reforms -- the back-and-forth discussions on the fiscal side also added a lot of uncertainty,” said Carlos Carranza, a senior investment strategist at Allianz Global Investors in New York, whose firm has recently reduced its underweight position on the currency.

The Colombian peso has tumbled around 11% in 2021, and although it has staged a partial recovery this week, it remains one of the poorest performers this year along with the currencies of Argentina, Turkey and Peru.

At one stage earlier this week, it tested the psychological 4,000 per dollar level, but has since clawed back to around 3,859, helped in large measure by the prospect of flows stemming from Ecopetrol’s deal to buy Interconexion Electrica SA. That news helped give the currency a bump of more than 2% Thursday, but does not fundamentally alter the interest-rate landscape.

The underperformance of the peso in 2021 is even more eye-popping when one considers that the price of oil -- the nation’s biggest export product and typically a significant market driver -- is actually up significantly this year. A gain of more than 40% in West Texas crude has helped to drive gains in oil-linked currencies like the Canadian dollar and the Russian ruble, but Colombia’s has remained resolutely in the doldrums despite improved terms of trade.

The year has not been easy for Colombia. An attempt to improve the country’s fiscal situation with tax-reform measures triggered a political crisis that ultimately led to the proposed changes being aborted, the finance minister resigning and the nation’s credit rating being cut to junk.

The fiscal situation is doing little to burnish the country’s appeal, with the budget deficit currently expected to equal around 8.3% of gross domestic product in 2021, the worst in more than 15 years.

That kind of deterioration has not only weighed on local-currency assets and helped spur rating cuts, but has also hurt on the country’s standing in international credit markets too. The yield premium over U.S. Treasuries on Colombia’s 2031 dollar bonds has widened to around 223 basis points from a low of less than 150 basis points in January. The cost of insuring against non-payment of debt for the next five years is up around 60 basis points in 2021.

On top of that, accelerating inflation has been met with caution by Colombia’s central bankers. In late June, officials were unanimous in opting not to join its neighbors in tightening even after a surprise decision by Mexico to hike. In July, they signaled tightening was to come down the line, but once again stood pat.

Absent a clear push toward higher rates, investors have proved reluctant to favor the peso, choosing instead to seek out better yields elsewhere.

Shortly before another faster-than-expected consumer-price inflation reading, central bank boss Leonardo Villar this month told lawmakers that “we have to start thinking soon about gradual upward adjustments in the interest rate.” The next scheduled opportunity to do that comes on Sept. 30, when investors will be keenly attuned to whether the cash benchmark gets lifted from its current level of 1.75%.

The short-end of local swap curve is currently pricing in a key rate of around 3.23% in six months.

The prospect of rate increases has some observers looking more optimistically at the currency, and the median estimate of forecasters surveyed by Bloomberg is still for it to end the year stronger than where it is now.

Brendan McKenna, a currency strategist at Wells Fargo in New York, is one observer who thinks that the worst is over for the currency, and that it could strengthen over the medium term, assuming policy makers do follow through with hikes and the political situation remains stable.

How those factors play out remain key for the currency. At present, the peso offers one-month carry of just 0.14% once you make adjustments for implied volatility. That’s around half of what investors can get in Brazil and a fraction of the 0.48% seen on Mexican peso.