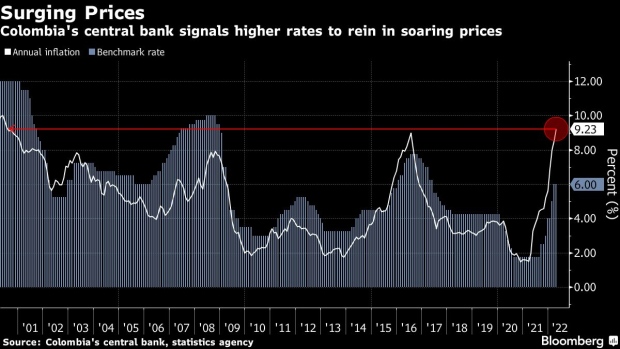 (Bloomberg) -- Colombian inflation accelerated to its fastest pace since July 2000 last month, as the central bank signals it will continue to raise borrowing costs to rein in soaring prices.

The annual inflation rate rose to 9.2% in April, the national statistics agency said, surprising all 24 analysts surveyed by Bloomberg who had a median forecast of 8.8%. The pace of consumer price rises is more than double the upper limit of the central bank’s 2% to 4% target range. Prices rose 1.25% from a month earlier.

Inflation had surged beyond its target ranges across all major Latin American countries, even before Russia’s invasion of Ukraine sent prices of wheat, fertilizer, and energy rocketing.

Food prices in the Andean country jumped 26% in April from a year ago.

Colombia‘s central bank has lifted its borrowing costs to a five-year high of 6%. In minutes of it’s last meeting, policy makers said there is consensus in “advancing in a gradual but firm process“ that guarantees returning to the 3% mid-point inflation target.

Annual inflation may have peaked in April given the high base of comparison from May of last year, Camilo Perez, head analyst at Banco de Bogota, said before the inflation report was released.

Food prices spiked in May 2021 as protesters blocked roads, making it difficult to get farm goods to market. Last year “food prices surged and it’d be hard to see a repeat of those levels this year,“ he said.