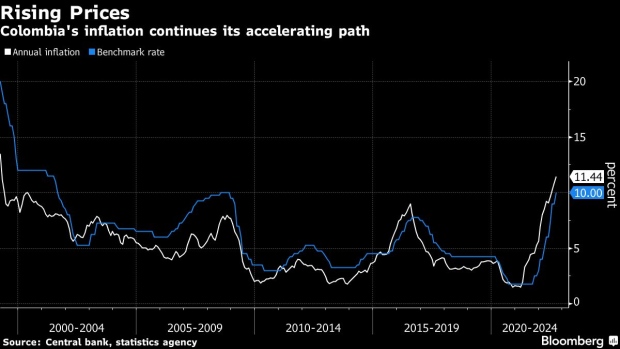 (Bloomberg) -- Colombian inflation surged more than forecast to a new 23-year high, adding pressure on the central bank to keep raising interest rates, and complicating the task of the government as it tries to phase out fuel subsidies.

Consumer prices rose 11.44% in September from a year earlier, the statistics agency said Wednesday. That compared to a median estimate of 11.29% by economists surveyed by Bloomberg. Prices rose 0.93% from the previous month.

Central banks across Latin America have been battling the biggest inflation shock in two decades this year, which was aggravated by higher food and fuel prices caused by Russia’s invasion of Ukraine. Colombia’s jump in annual inflation was led by a 27% rise in food and drink prices.

The central bank is now bracing for an increase in fuel prices as the government of President Gustavo Petro starts to reduce gasoline subsidies from this month, despite complaints from motorists. Petro, who took office in August, is also expected to push through a large increase in the minimum wage, which would take effect from January.

The central bank targets annual inflation of 3%, plus or minus one percentage point.

Colombia unexpectedly eased the pace of interest rate increases last month, as policymakers fret about slowing economic growth. The central bank has raised its key interest rate by more than eight percentage points since September 2021, to 10%, in a bid to curb soaring consumer prices.

The central bank raised its economic growth forecast to 7.8% this year, which would be the fastest among major economies in the Americas. However, that will fizzle to just 0.7% in 2023, according to the bank’s estimate.