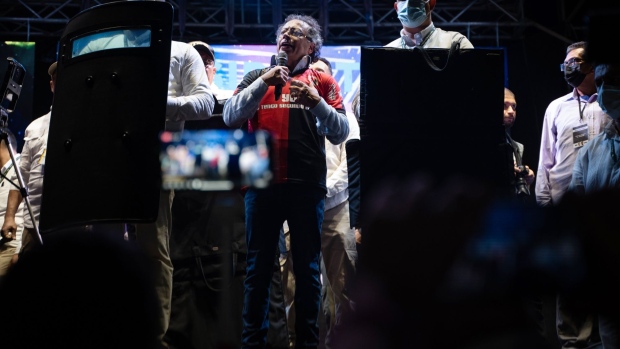 Gustavo Petro, presidential candidate of the Colombia Humana party, speaks during a campaign rally in Cucuta, Colombia, on Thursday, May 5, 2022. Colombia's May 29 election is being closely watched after neighbor Peru and then Chile voted in unconventional leftist presidents within the past 12 months, showing how inequalities aggravated by the pandemic are shaking up Latin American politics. Photographer: Nathalia Angarita/Bloomberg , Bloomberg

(Bloomberg) -- Police, bodyguards and anti-explosives experts are on high alert to prevent assassins from getting to Colombia’s most divisive presidential candidate in the final weeks before elections.

Colombia is the only major country in Latin America that’s never had a leftist leader, and polls suggest it’s about to get one in Gustavo Petro. That’s raising the campaign temperature in a country with a history of political violence.

“Many alternative presidential candidates have been assassinated, and I’m the one who’s come closest to winning, according to the polls,” Petro said in an interview en route to a rally in eastern Colombia last week. “That is to say, the risk level is very high.”

Petro, 62, may have a point in doubting his safety in a country where four presidential candidates have been murdered since the 1980s. Petro says that his status as the alternative to “traditional power in Colombia” makes him a target ahead of the May 29 first-round vote.

Certainly, his plan to end an economic model based on oil and coal is a radical one that has investors on edge at the prospect of any disruption to a formula that has allowed Bogota to oversee the fastest growth of any major economy in the region this year. Yet with polls showing Petro leading his conservative rival, Federico Gutierrez, Colombia may be next in line to challenge Latin America’s dependence on commodities.

Colombian voters care much more than they used to about issues such as the environment, social justice and race relations, and Petro is successfully tapping that “generational change,” according to Andres Mejia, a political consultant who teaches at the business school of Bogota’s Andes University.

“Fear of the left, which up to 2018 had been perhaps the dominant force in Colombian politics for the past 20 years, is now at its lowest historical point,” he said.

That hasn’t necessarily diminished the risks for a candidate espousing such change.

Last week, Petro canceled a trip to Colombia’s western coffee-producing region, citing what he said was a plot to kill him by a drug-trafficking gang called La Cordillera.

In a hangar in Bogota, only four airline employees are allowed to approach the airplane Petro uses, which is searched for bombs by a police dog before he boards. When he gets on stage for campaign rallies, he’s surrounded by three minders with bulletproof shields.

The security for Gutierrez, 47, and the other candidates is less intense.

Asked about the threat level, the National Protection Agency, which along with the police provides the candidate with bodyguards, said that Petro has a “robust” security detail that makes him among the best-protected people in Colombia.

While Petro’s calls to oust the traditional political class could gain him enemies, they also allow him to harness anger at the government after poverty and unemployment rose during the term of President Ivan Duque.

Gutierrez, whose campaign focus is on security and tackling violent crime, is close to Duque’s government ideologically. A recent poll shows Petro with a 13 percentage-point lead in the likely event that they face each other in a June 19 runoff.

Petro’s followers, many of them young, have high expectations. Yet their hopes of radical change may be dashed if he wins, since institutions such as congress, the constitutional court and the central bank are likely to stand in the way of many of his plans.

Even so, Petro says there is much his government could do without congress to end an economic model based on “oil, coal and cocaine.” This includes halting the awarding of oil exploration licenses and firing most of the board of state-controlled oil producer Ecopetrol SA, Colombia’s biggest company.

Under new management, Ecopetrol should convert itself into a clean energy giant, rather than continue to be mainly a crude producer as the world transitions away from oil, according to Petro.

“Amid the climate crisis, oil assets depreciate,” he said. “Their days are numbered.”

Petro’s campaign may be getting a boost from the fastest inflation in more than two decades. Food prices have risen 26% over the last year, causing widespread misery in a country where many people live hand to mouth. Petro sees the rise in hunger and malnutrition as a key difference to his previous bid for the presidency in 2018, when he lost to Duque.

He blames the nation’s dependence on imported food, and wants to boost local production by subsidizing fertilizers and other agricultural inputs, and by protecting Colombian producers with tariffs.

Petro rose to prominence during the 2002-2010 presidency of Alvaro Uribe, as one of the government’s most effective critics in congress. As mayor of Bogota, he is remembered among other things for banning horse-drawn carts from the streets, and for a failed bid to have the city take over trash collection from private operators.

Born on Colombia’s Caribbean coast, his family moved to a town near Bogota during his youth.

In the 1970s he joined M-19, an urban guerrilla group whose war on the government included a storming of the Supreme Court building in 1985, which left dozens dead, including 11 justices. Petro did not take part - he was arrested weeks earlier and was serving prison time for his activities.

After the security forces captured him, he spent a year and half in jail, and says he was tortured for four days. The group demobilized in 1990 following a peace process, and Petro embraced democratic politics. Another peace deal the government signed six years ago with Marxist guerrillas may further destigmatize his past, especially among younger voters.

Read how a peace deal brought war on Colombia’s Amazon

Petro’s opponents say that, given the chance, he would follow the economic path of neighboring Venezuela that led to catastrophe. In fact, he says that South Korea, which developed rapidly into a knowledge economy without many natural resources, is a better model for Colombia.

When Colombia sent troops to fight alongside the US in the 1950-1953 Korean War, “the South Koreans were much poorer than we were,” he said. “Now they’re 10 times richer.”

He wants to invite Korean academics including development economist Ha-Joon Chang of the University of Cambridge to come to Colombia. He’s even called on devotees of Korean pop music, or K-Pop, to back his campaign.

“Bearing in mind the cultural differences, et cetera, I see South Korea as a good mirror for us,” Petro said.