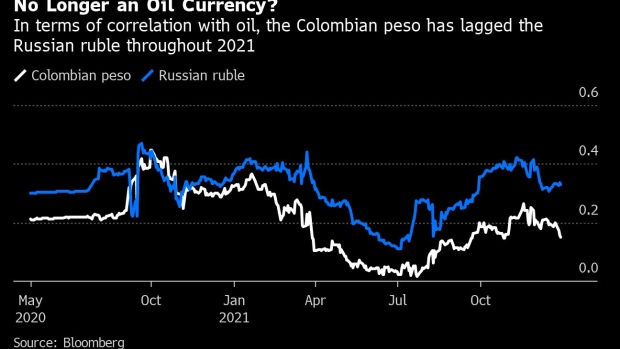 (Bloomberg) -- Colombia’s peso started the New Year by hitting a post-pandemic low. It may be a sign of things to come ahead of the May 29 presidential election.

While the currency is undervalued based on fundamental factors, congressional and presidential elections will likely stoke tensions and “temper a return to fair value,” wrote Kathryn Rooney Vera, head of research and strategy at Miami-based Bulltick LLC. The peso tumbled almost 16% in 2021, despite a 50%-plus rally in the price of oil.

That weakness has become a familiar story across the Andean region in the past year, with currencies sinking as left-wing candidates surge in the polls and finally win the election, spooking investors accustomed to decades of market-friendly policies. Even soaring commodity prices and rising interest rates did little to salvage the Chilean peso and the Peruvian sol last year. They are unlikely to come to the rescue of Colombia’s peso in 2022 either.

“Our scenario is for a strong depreciation in the first half of the year” as elections play out, said Camilo Perez, head analyst at Banco de Bogota. “The market saw what happened to the currencies in Peru and Chile where leftist candidates won and that’s going to be the main driver in Colombia as well.”

JPMorgan opened a long Peruvian sol, short Colombian peso trade back in November and has kept the recommendation ever since, given its belief that election risks are yet to be fully priced-in. The bank expects PEN/COP to rise toward 1,050, which means the peso could weaken toward 4,170 to the dollar.

Gustavo Petro, a former left-wing mayor of Bogota has emerged as the front-runner in polls. He has campaigned on a platform to raise levies on the rich, increase tariffs to protect locally-produced labor-intensive goods, halt new oil exploration contracts to fight climate change and potentially increase the tax on dividends, which is currently at 10%.

If no candidate wins a majority of votes in May, there will be a runoff the following month.

Not even further gains in the price of oil or higher interest rates are likely to lift Colombia’s peso, which was the fourth biggest loser among emerging-market peers last year.

Central banks in both Chile and Peru hiked rates last year and are set to raise them further in 2022, while the price of copper, their leading export, soared. Fat lot of good it did them though as political factors weighed.

“The Colombian peso has had little positive reaction to the historic surge in commodity prices as a result of ongoing waves of Covid-19, concerns about inflation as well as political tensions,” according to Miami-based Rooney.

Neither did rate hikes help. Policymakers in Colombia delivered 125 basis points of rate increases in 2021 and are expected to raise another 360 basis points this year, according to swap market pricing.

Oil leaped more than 50% in 2021, helping the Russian ruble hold steady, while doing little for the peso. As a result, the 100-day rolling correlation between the ruble and oil is now more than double that of the peso.

Banco de Bogota sees the peso depreciating to 4,100 per dollar by end of the first quarter and 4,200 by the second quarter. The currency could fall to a monthly average of 4,400 per dollar in June, after the May 29 presidential election, according to the bank. That compares with its record low near 4,238 per dollar, last seen in March 2020 at the height of the global pandemic.

Market reactions to the election will “get intense” and “it’s hard to pinpoint what level the peso will reach given the uncertainty,” Banco de Bogota’s Perez said.